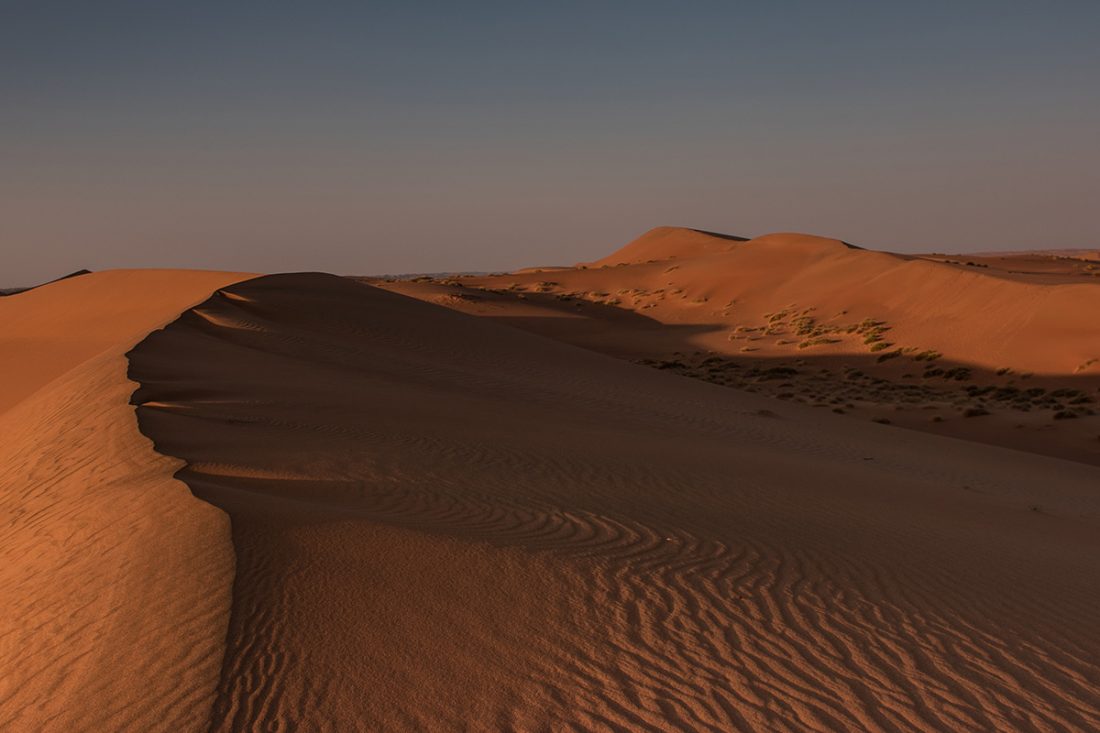 In the sun-scorched sand dunes of Oman’s Empty Quarter, nothingness reigns, the horizon doesn’t break, wildlife is hushed and no phone signal exists. CATHERINE FAIRWEATHER takes her young son into this extraordinary void.

Cradled between the grapefruits and the lemons in the fruit bowl of my Somerset kitchen are the geodes that my nine-year old son looted from an Omani sand dune one half-term holiday last winter. He pocketed them as they lay scattered around our desert camp, knobbly and uninteresting as small cauliflowers. But crack one open and there is a surprise: a fistful of sparkling quartz, a bit of geological magic; a perfect schoolboy memento of a journey to Rub’al-Khali, the ‘Empty Quarter’, the world’s largest sand desert, whose shifting borders stretch deep into Saudi Arabia, Yemen, UAE and Oman.

It is a desert within a desert – a billowing sea of monumental sand dunes surrounded by mile upon mile of endless gravel plains, on which we drive hour after spine-jarring hour on un-tarmacked tracks. The hypnotic monotony of the unyielding horizon is alleviated only occasionally by the sight of a twisted frankincense-tree, pyramid-shape hill or stark granitic boulder. It makes for a challenging game of I Spy. But, by the time a late lunch is conjured out of a hamper by our elegant guide Mussalim in the lee of an immense rock, oriental rugs strewn across the sand, I am enthralled. Mint tea is poured from a silver spout held aloft and warm pitta bread enveloping juicy yoghurt-marinated lamb is served. But the real seduction of this place is not about sensual delights. It’s about the power of nothing. There is no birdsong, no ambient insect’s buzz, no rustle of vegetation, no bars on my mobile phone; in short, a total absence of any sign of life or civilisation in this great space that forces an existential sense of peace and calm.

The journey to our camp in the heart of the Empty Quarter is the highlight of a trip that started three days earlier in the seaport of Salalah in southern Oman. Once the centre of the incense trade route that made this region of Dhofar so rich, the city also features the Sultan’s gleaming marble palace, which we pass en route to epic white-sand beaches, broad and long as highways, bordered by the pale jade of the Arabian Sea. In the swell, dolphins rock and dark smudges on the water turn out to be great shoals of sardines hauled in by the netful by fishermen along the shores. These are destined not for human consumption, but as fodder for the herds of camels who wander photogenically across the shores, sedate and regal despite the manic flapping of the gulls.

Beyond the coastal town of Mirbat, we find our camp set up; local travel specialist Hud Hud Travels, headed by two British men, one of whom is an ex-commando, has arranged glamorous safari tents in a semi-circle around the open seating area, or majlis, strewn with tasselled cushions fit for an odalisque, with a hookah pipe, chessboard, books and plates of dates to complete the orientalist’s tableau. An icy drink served in a tin goblet cuts across the dryness of the desert air like nothing else, while the children, now unleashed, dash across the shell-studded sand and refresh themselves in the surf.

The next day we explore the region, venturing into the cool waters of a wadi (valley) and driving into the lush mountainous hinterland of the Jebel Qara, invariably and incongruously cloaked in fog; the only corner of Arabia to catch the khareef, or monsoon. It is easy to be dazzled by this pocket of green in a sea of dust, to be enveloped by the effortless stylish luxury of the Hud Hud outfit, the warmth of the open fires, the comfort of the black and white goat-skin tents, the kilim-strewn picnics, the chocolate cakes produced from kitchens no bigger than a suitcase – so easy, in fact, that you forget how harsh and hostile this landscape is. Pampered travellers that we are, on this most outlandish and exotic of short breaks, we can only guess at the grim realities of the great explorer Wilfred Thesiger’s experience of a ‘bitter, desiccated land that knows nothing of gentleness or ease’.

Instead, the sea of undulating dunes in the Empty Quarter looks to us as soft and innocuous as whipped butterscotch Angel Delight. And as we crest each summit and plunge down each subsequent vertiginous slope, the children whoop and clap, carrying their boogie boards to the top of the 800-foot dunes that surround the camp.

Where else in the Middle East do you feel safe enough to enjoy the freedom of sleeping under the stars, should you choose? Where else can you enjoy a culture that brooks no hostility to foreigners, that embraces both its historical and traditionalist roots and modern progress, to gaze at the night sky where the evening star hangs bright as a jewel in a Bedouin’s ear? Oman is one of the last remaining corners of the Arabia of romantic imagining, a land of golden dunes, loping camels and shady date-palms, of desert lands scented by frankincense; the resin that in the time of Christ and well into the sixth century AD was more valuable than gold. We bought bags of the hard amber-coloured sap in the former slave markets in Salalah. Whenever I chuck a handful on the fire, its earthy, resiny smell reminds me of our exotic adventure; the gnarled and twisted trees that grow out of the barren rock, Mussalim rustling around the camp in his incense-scented robes. I also carry the imprint of the journey in the shape of a cresent-shape scar on my ankle, a skin graft that is the result of a septic sand-fly bite following a hike in the desert and a paddle in an oasis reservoir.

The experience left a less-physical lasting impression on my son, who still gloats over his geodes and other treasures from the fairy-tale land of Sinbad and Scheherazade: a dagger with a hilt shaped like a horsehead; a camouflage head-dress that Mussalim taught him how to wear; a camel’s jawbone polished by the sun and sand that now sits incongruously on the dry stone wall of our West Country home. Our Arabian nights will keep us dreaming for some time yet.