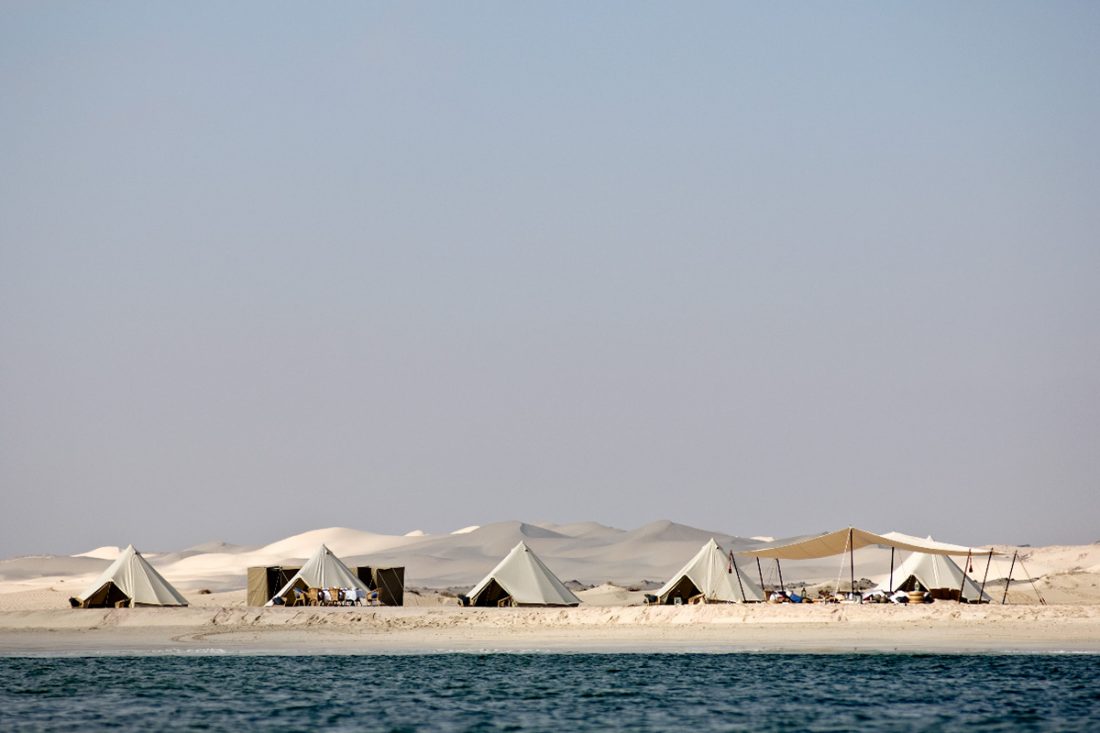 The desert around Khaluf is made of white sand that is particularly crystalline and, at dusk, dunes that have spent hours shimmering in the heat suddenly appear glacial. Despite the illusion, there is no chill to the sea here as I sit, chest-deep, in roaring breakers that expertly pummel the day and the desert from my limbs.

I look back to shore and our camp – five glowing tents that sit on a low bluff is the only thing separating the wilderness of the desert from the sea. A flickering hurricane lamp marks the entrance to my tent and, as my mind drifts, I’m lost in the events of the last few days.

I’m here with Hud Hud Travels, a tour operator that specialises in luxury camping and private expeditions in Oman. Over three nights, I’ll zigzag across the north of the country, from the desolate heights of the Western Hajar mountains, through the vast dunes of the Wahiba sands, to one of the most remote shores on the Indian Ocean. Each day I’ll travel by 4×4, and each night I’ll sleep under the stars, holidaying in a manner that aims to combine the comfort of an African safari with the style and scenery of an Arabian caravan. This kind of road trip is normally the preserve of the seriously wealthy but I’m initially sceptical about the notion of a luxurious life under canvas. From our very first night however, I start to see the appeal.

As evening approaches on our first day, we climb an unmade switchback that cuts across the side of the mountains like a scar. It’s a route Nabhan, our Omani guide and driver, approaches with ease. A former rally champion, he has guided hikers, filmmakers and the adventurous across Oman for many years, and as our Land Cruiser kicks and bucks unexpectedly, he relates anecdotes from earlier trips with a wry smile and a dry sense of humour, mostly as a way of calming our nerves.

As we crest a steep slope, our camp appears below us, the only sign of humanity in a shallow-sided wadi that snakes off into the distance. There’s a safari tent for each of us, complete with its own separate shower and toilet cubicle, and an open-sided majlis and dining tent at the heart of the camp.

The enormity of the logistical effort required to get my luggage and me to a luxury camp a thousand metres above sea level only really starts to sink in when I take my first shower. As I stand with my nose peering over my shower’s canvas parapet, I notice that each tent stands in its own patch of perfectly cleared sand, no easy feat in a wadi whose floor is peppered with potentially bone-breaking boulders and stones. As my eyes start to focus on the camp’s finer details, it seems that the tents – which colour coordinate perfectly with the Hajar’s mottled geology – have been chosen specifically to compliment the landscape. It’s a notion I dismiss as fanciful until I realise we’ll stay in a different tent each night, each with its own character that goes some way to defining the camping experience.

The following evening we arrive in the Wahiba sands, a 190km-long field of parallel sword dunes created by monsoon winds that whisk shell-laden beach sand here from the Gulf of Oman. The site of some of Oman’s most popular camel races, the Wahiba is also home to Bedouin communities that have only just received mains electricity and the care of camels and goats still plays a central role in daily life. When we finally arrive at our camp after a 50km off-road drive into the dunes, we are greeted by four traditional black and white Bedouin goat hair tents and a matching majlis lit only by lanterns and a roaring fire. The following morning, I wake to delightful rays of dawn light that pierce the goat’s hair, only to find my face caked with a stubborn dusting of sand.

Each of our camps is linked by the handsome but often relentless Omani landscape of cracked peaks, plains of gravel and broken dunes, a vista that only changes on our drives through the desert and through the increasingly shabby towns and hamlets that line our route south. Picnic lunches, prepared by Nabhan, are taken in the shade of contorted Ghaf trees, and when we do stop, the only disturbance is the seemingly miraculous appearance of small bands of inquisitive goats, which always appear as if from nowhere.

Even though I am only a passenger, the driving and the distances take their strain. Being bespoke, Hud Hud itineraries are normally less arduous as guests tend to prefer to relax more and travel less, but this trip was designed to provide a glimpse of Oman’s main attractions – high mountain, desert and sea – and by the time I return to Muscat we have covered almost a thousand kilometers in four days.

Hud Hud prides itself on navigating the road less travelled, especially when the destination is already well known. When we visit the popular Wadi Bani Khalid near the ancient town of Ibra, our guide escorts us past the well sign-posted turn-off and we head instead for an oasis in another branch of the gorge. The gardens here are famous for their red-skinned bananas, a local delicacy, and we walk through private groves of date and citrus before heading to secluded pools and desolate high waterfalls.

The drive south from our desert camp in the Wahiba to our last camp at the beach near Khaluf takes the best part of a day, and it’s a journey back in time as much as it is distance. As we enter the dusty market town of Jalal Bani Bu Ali, we pass greasy, open-air mechanics’ workshops and tawdry shops stacked with cheap plastic toys before arriving at the old town, a crumbling citadel dominated by massive walls and an impregnable-looking keep. The damage here looks seismic, but a closer inspection reveals the town’s violent past. In the early 19th century, Jalal Bani Bu Ali’s Wahabi community revolted against the Ibadi Sultan in Muscat, who sought the assistance of the British in crushing both the rebellion and the town. That was in 1822, but canons still litter the sands of the citadel, as does the final breach in the castle walls, chilling reminders of the battle that once raged inside.

From Jalal Bani Bu Ali we take the new coast road south, between the eastern edge of the Wahiba and the Arabian Sea. Small fleets of Bangladeshi fishermen set sail from the beaches here, hunting for the tuna that’s so prized by the mountain tribes of Oman’s interior. The fishing is done by hand, with simple rods and nets, and the catch is hauled onto the beach each day by rusting 4x4s that end up being left where they finally collapse.

As we head even farther south, improbable Bedouin communities start to appear between our road and the sea, forming a direct visual link to a past that for many no longer exists. The only concrete buildings here are schools that service the large numbers of children who play barefoot in the sand, and failed government housing compounds that stand empty, rejected in favour of life elsewhere or in the smaller palm frond and breezeblock dwellings that pepper the dunes. They belong to semi-nomads who continue to make seasonal journeys from the interior to the coast, a way of life that disappeared in the rest of the Gulf with the coming of oil.

We eventually turn off the road and drive overland across salt-crusted sabkhah toward the sea. As the light falls something about the sight of the sea makes us lightheaded and even Nabhan races our Land Cruiser along the foreshore to reach camp before sundown. I change and dive chest deep into the warm water, where I’m lulled by fatigue and the soft sand under my feet. By the time I wake from my reverie, the moon has risen and the sea has become a lunar engraving in stark black and white. That night I sleep soundly, despite the thunderous roar of the ocean, in a crisp white canvas cocoon that protects me from the insistent maritime breeze. Luxury camping? You bet.