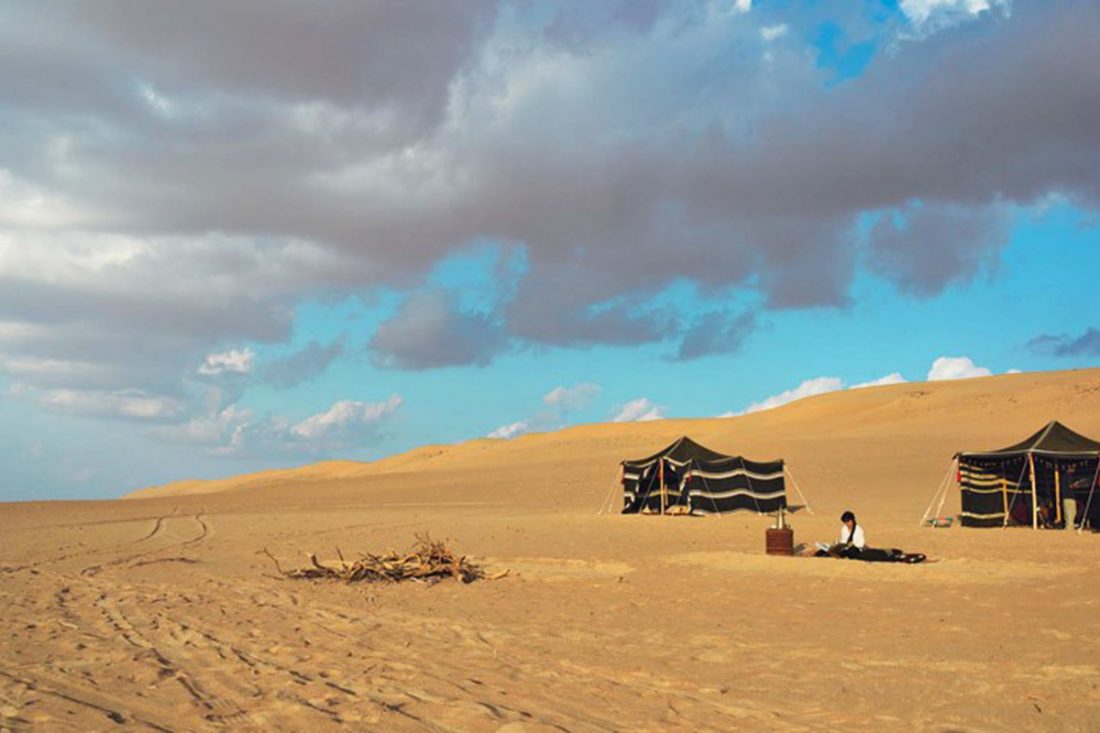 Our driver and guide is Sean Nelson, a forty-seven-year-old former British Royal Marines Commando and onetime major in the Oman army’s Desert Regiment who launched a luxury camping company three years ago.

“The idea was to combine the comfort of African safaris with the style of an Arabian caravan,” he tells us, adding that he considered running expeditions in Mozambique but stayed on in Oman because its wilderness is diverse and its people so nice. Sean’s uniform these days consists of a pressed navy shirt, khaki cargo pants, and Birkenstock sandals, and he is so courteous that it’s hard to imagine him wielding anything more threatening than the laser pointer he uses to show us nighttime constellations. We’ve signed up because Nelson and his team avoid the usual four-by-four tourist route and have cracked the secret of travel in Oman: being at the right place at the right time.

Our first campsite looks like a film set from Lawrence of Arabia: three black-and-white-striped goat-hair tents (bespoke from Aleppo, Syria) and a majlis, or sitting room, decorated with antique coffeepots, cushions, Indian silks, and fine wool blankets from Dhofar. (Majlis also has a broader meaning, as a place where rulers bend an ear to the troubles of their subjects.) The magic of the place lies in arriving at the perfect hour, when the setting sun turns the dunes pink and russet, light fills the west-facing tents, and Sean’s camp staff bring cool drinks-with ice cubes. When night falls, there’s no ambient light from towns to spoil the star gleam, just dozens of gas lanterns illuminating paths between the tents and a wood fire to warm our hands and faces. At dawn, shadowy hooded figures emerge and heat water for hot showers in the open-air canvas bathing tents, equipped with silver ewers. I climb the dune behind the camp and watch the sun paint a swath of light up the valley floor, trying to remember the last time I heard… absolutely nothing.

After breakfasting on chili omelettes, we get back in the SUV, head for abandoned eighteenth-century merchant palaces in the old trading town of Ibra, and fall by chance upon a scene from another age. On a gravel plain, to the music of bladder pipes and goat-skin drums, turbaned men ride Arabian horses whose bridles jangle with silver medallions. One rider leaps barefoot atop his cloth saddle and stands at a full gallop, arms spread like wings, gripping red reins in his teeth. We park and ask permission to take photographs as a semicircle of men and boys chant a rhythm while two men holding swords leap, feint, and stab in a slow-motion dance. In a separate women’s tent, veiled female dancers ululate and sway, their henna-blackened fingers sporting filigreed golden rings.

Oman’s tradition of welcoming strangers is ancient and ingrained; as early as the year a.d. 632, the caliph Abu Bakr, intent on converting Oman to Islam, praised the moral behavior and legendary hospitality of its people. “Ta’ala, ta’ala”–“Come, come”-a man insists, and our group of three women and two men is invited into the larger men’s tent, where we are treated to a haunch of date-fed goat marinated in cinnamon, cloves, pepper, and cumin and served on a silver platter of cardamom- and rose-scented rice. Following our hosts’ lead, we use our right hands to pull off pieces of steaming, fragrant meat and squish the rice into balls that we scoop into our mouths. Our cultural faux pas – we are gently reminded to take our shoes off inside the tent and are requested not to photograph people eating – are tolerated with amusement. A local official with a khanjar, an ornate silver dagger, in his belt comes over to offer bottles of water and fruit juice, as well as anti-bacterial hand gel to ward off H1N1. When we try to thank him for the meal, he puts a hand over his heart and says in Arabic, “We thank you for being here.”

I’ve been to “bedouin dinners” thrown for tourists across the Middle East. This is the real deal, a desert block party thrown by Omanis for Omanis. It has a purpose nonetheless: the inauguration of a paved road linking the village of Al Qabil with the Arabian Sea coastal trading town of Al Ashkharah. The road enables children to reach school more quickly, provides their parents easier access to weekly markets, and portends the arrival of more and more foreign travelers like us.

Although Oman’s heritage is reflected in more than five hundred forts and archaeological sites, many of its greatest assets are natural. To reach Barr al Hikman, the wild beach that is our next campsite, we must skirt the dune field. We drive southwest from Ibra and leave the tarmac at Mahut, the last town with a gas station, to cross a salt pan so long and flat that it looks like we’re driving off the edge of the world. When we get out of the car for a break, our feet sink into the sabkha, or salt crust, which is covered with tiny seashells and white salt crystals the size of rice grains. We reach a green lagoon where pink flamingos feed on tiny shrimp; just beyond lies white sand littered with bleached whale ribs and fragments of sea turtle carapace. Far offshore, we see a dhow fleet fishing for tuna, but there are no other humans, just armies of ghost crabs who drag the sea’s bounty-tide-stranded puffer and unicorn fish-to their lairs.

We spend the next morning learning to make Omani coffee on a wood fire, and getting more lessons in how to tie a perfect dhofari black turban, from Saber Guhlam al Beluchi, our translator, whose stylish solution to our bad-hair days instantly makes me proclaim him Oman’s Frederic Fekkai. “It must be nice, and you must hide the tassels,” he insists, showing us how to fold the shemagh, or scarf, into a triangle, place it over our heads, and wrap the ends into a turban, using the scarf’s tassled edges as a base for the perfect headband. Even after three nights’ camping, Saber smells wonderful and wears the Omani dishdasha with a perfumed neck tassel. I start to feel like an odoriferous country bumpkin when he describes how Omani wives perfume men’s clothes with homemade incense, and how they layer precious scents beneath their own abayas. “When men get married,” he tells me, “they must know how to tie their turban and wear their khanjar. They must know how to be a perfect Omani.”

How to tie a shemagh