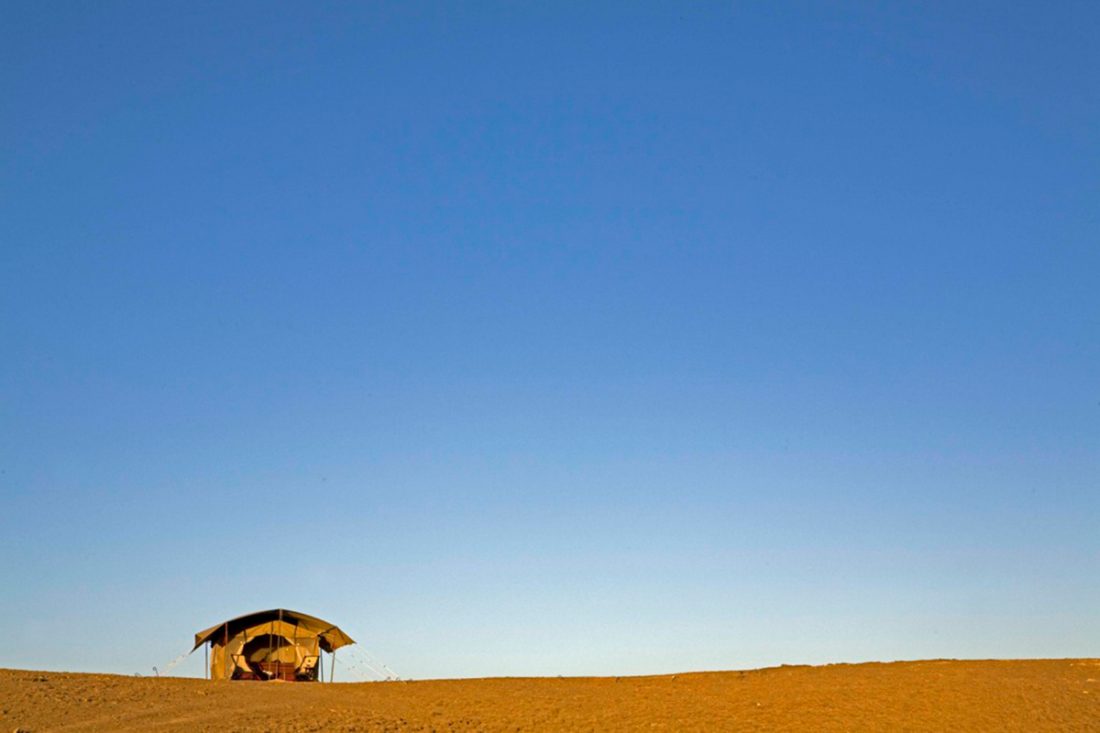 Until now, nothing has offered quite the same degree of dislocation, of utter melon-twisting discombobulation, as this tiny dose of the colossal, timeless, unknowable, Empty Quarter. We jump into one of two waiting Nissan Armadas, giant 4x4s painted a sexy military matt beige, and head to our first camp.

Unlike luxury safari camps in Africa, this one is mobile, designed to be pitched and struck every few days. We’re on a shortened itinerary because of Ramadan, but most guests will spend two nights on the beach, then move into the Empty Quarter for a further two.

We land in Muscat, capital of Oman, on Saturday morning after an overnight flight from Heathrow, then fly on to Salalah, a port city in the far south. An hour and a half later we arrive at a crescent-shaped bay, where the Arabian Sea crashes against the white sand, framed at either end of black volcanic outcrops. Stately brown canvas tents are spread out along the curve of the bay their porches facing the waves, and in the centre is a majlis, a covered but open-sided sitting area, full of cushions. It’s 32C but there’s a delicious sea breeze. After lunch we lounge about, then go out by boat to snorkel. Four dolphins swim up alongside – although they scarper when we flop into the water. When we return to our tents, which have proper beds, carpets, stacks of fluffy towels and robes, they are lit with hurricane lamps. The sun is setting on the Jebel Qara, the mountain range that runs parallel to the coast.

A long table, cloth held in place by ornate miniature weights, has been set up on the beach and is surrounded by flaming torches and bedecked in candles. Frankincense smoke billows across from a little charcoal burner. It’s all quite overwhelmingly beautiful for our first night…

We set off early, heading west from Salalah along the coastline. Flamingos stand in the shallows of Mughsail Beach, a three-mile stretch of white sand with high cliffs, draped in morning mist, at either end. Mike tells us an old Arab saying: “Rise early, for the hour after dawn is borrowed from paradise.”

The road swoops and soars through the mountains, barren and empty but for the occasional gnarled and stunted frankincense tree. Their resin, which slowly oozes out and forms into little translucent gobbets, was once more valuable than gold and made this the world’s richest area in 1000BC. The trees look wild, but the sap from each is still harvested. The stuff sold in the souk in Salalah is the best quality available (though quite what I’m going to do with the five packets I brought home is another matter.)

The tarmac soon gives out and we descend into a succession of wadis, whose pebbly floors have been worn by ancient rivers and now carry the bumpy roads. Later, we arrive at perhaps the world’s most isolated luxury camp. People rush out and present us with cold towels and drinks. It feels like coming upon a colonial-era expedition – we have a retinue of no fewer than 14.

I get up at first light to climb the dune and take some photos. But my camera’s got sand in it and the lens won’t open, so I’m forced to sit without distraction and wait for the sun. Faced with a moment of such cliched perfection, I’m slightly at a loss – coming here on such a whistlestop pilgrimage puts you under a terrible pressure to feel something meaningful on command. This is it, the jewel in the crown, the view we’ve taken two flights and a 10-hour drive on desert tracks to reach, the sight that tourists are being asked to pay £3,000 to glimpse. I stare into the distance, feeling distinctly emotionally constipated. To be brutally honest, it’s just a load of dunes – and dunes that are strikingly similar to ones you can see in lots of easier-to reach spots.

But a faint laugh from the waking camp far below distracts me, and I realise that of course there is something truly special here. Our little camp is the only sign of human life for miles, and in a few hours that will be gone, my footprints will be erased by the wind and I’ll be back in London. That contrast prompts a sort of emperor’s new clothes realisation, albeit in reverse: the whole point is that there’s nothing there. It’s as if all those soldiers were protecting an ever more scarce and precious resource – complete, silent, empty space.