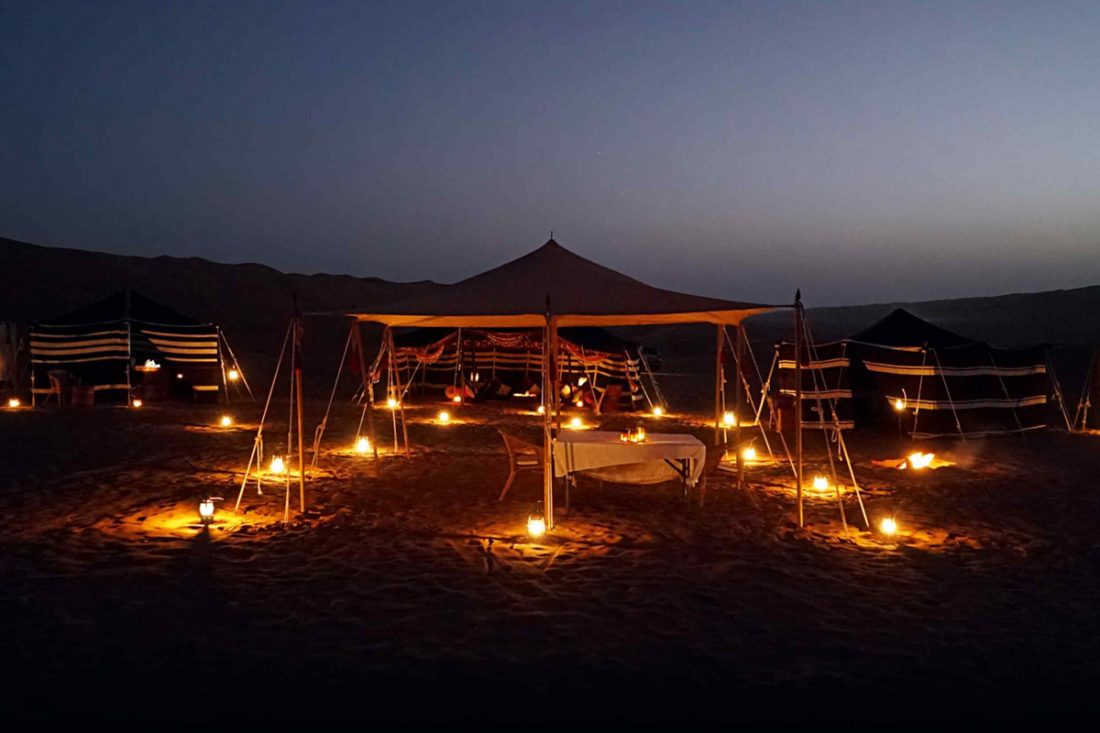 Alice Brudenell Bruce (How to Spend It)

As Oman continues to open up to the culturally curious, Alice B-B embarks on a singular adventure – brief but stretched to bursting with thought-provoking encounters – across empty sands and along pristine coasts.

Somehow, despite being in the geographical thick of the Middle East, Oman has managed to stay on the geopolitical fringes. Whether this is due to the country’s topography (protected by desert on one side, sea on the other); or being the world’s only majority Ibadi Muslim country (combining elements of both Sunni and Shia and championing respect for the beliefs of others); or the standpoint of diplomacy propagated by its leader Sultan Qaboos bin Said al Said, who, since overthrowing his father Said bin Taimur in 1970, has encouraged modernisation and delivered education, healthcare, social reform and economic prosperity is difficult to say.

What’s clear is that a combination of this and more makes Oman the dream landscape for what former British army captain Geordie Mackay-Lewis, co-founder of experiential-travel and yacht-expedition specialist Pelorus, describes as an “asymmetric adventure”. “Oman is a multifarious environment, with tourism still in its infancy,” he notes. “You can have five different experiences a day, often in undiscovered places, in a more authentic and immediate way than in, say, Egypt or Morocco.” Using a unique reworked army operations format that, Mackay-Lewis says, “forces us to think outside the travel-industry norm”, Pelorus has curated a multilayered Oman immersion, packing in as many experiences on as many social and physical latitudes as possible – in my case, in just four brief days. 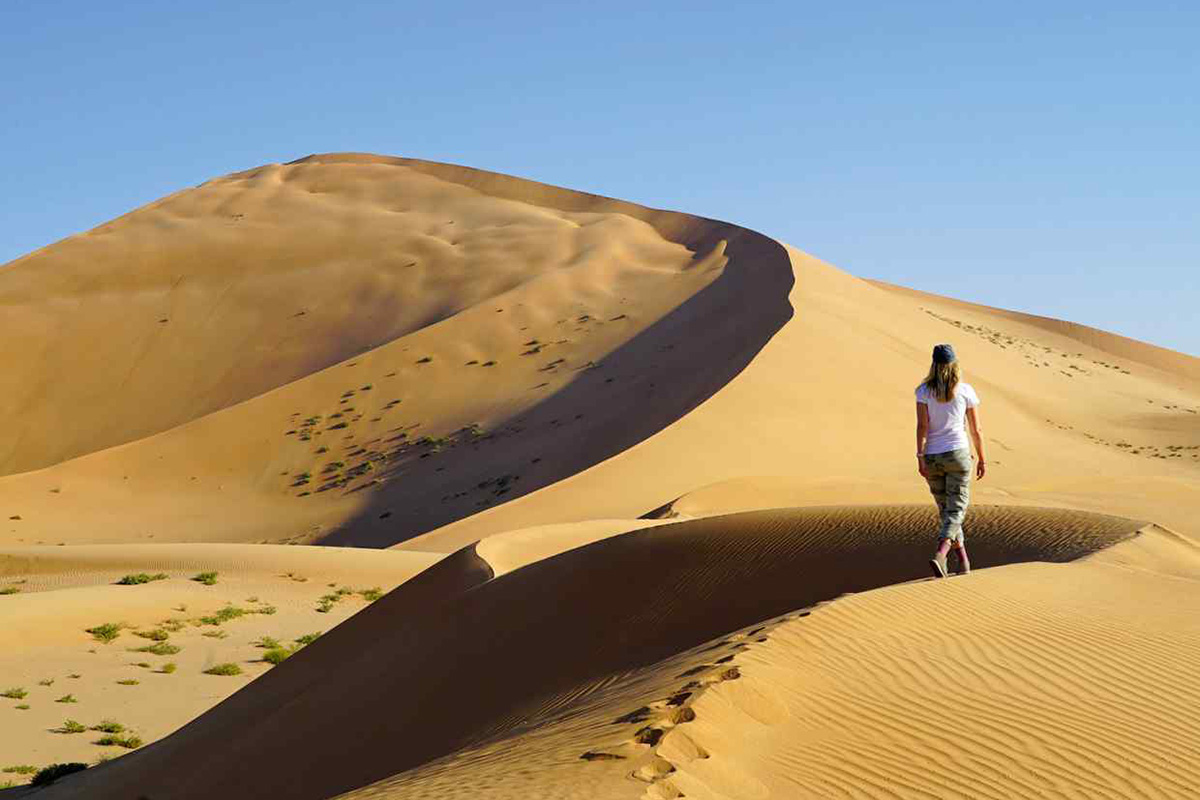 We start in Salalah, the country’s second-largest city, beside the sea in the southern Dhofar region. My guide, Mussallem Al Mahri, lived as a nomad until the age of 10 (he was actually born in a cave). He’s from the Mahri tribe, traditionally frankincense farmers who produced the resin that was traded along the Arabian Peninsula for over 6,000 years and at times was worth more than gold. Today the trees that once grew so abundantly in this perfect coastal-desert climate have been overharvested or ravaged by camels. At Unesco-listed Wadi Dawkah, he shows me a protected plantation whose 12,000 gnarled frankincense trees stretch far into the distance. “The strange thing is,” he says, “they don’t produce resin. And no one can understand why.”

We’re invited to lunch at Al Mahri’s home, a great honour in Omani culture: shoes off, past the frankincense burning in the hall and into the sofa-lined living room to find his wife, daughters and a gaggle of tiny grandchildren. But the true privilege is meeting Al Mahri’s father Hassan – more than 100 years old, lives on dates and milk and is perhaps the last man alive to have met Bertram Thomas, the first European to cross the Empty Quarter (Rub al Khali). Al Mahri translates: “Word went round that this crazy English guy was paying for desert animals” – this was likely research for Thomas’ Arabia Felix, a chronicle of the desert’s wildlife, inhabitants and culture – “so of course everyone brought their animals to him.” After a lunch of rice and chicken, eaten cross-legged on the floral carpet, it’s time to head for those very sands and my own adventure.

It’s a long old drive to the Empty Quarter. And for the impatient, bad news: there’s no getting dropped in by helicopter. Only the military has access to choppers, and while some camps skirt the edges, we are venturing well beyond the perimeter. The journey in the Toyota Land Cruiser – “the modern camel,” jokes Al Mahri at the wheel – is peppered with tales of his nomadic days. “Life in a cave is beautiful; it’s cool in the day, and at night the goats’ breath keeps you warm,” he says, before describing the first time he met an Englishman: “I was nine, and I thought he was so white because he drank alcohol.”

Suddenly, he hangs a right. No road, no signpost, no 3G, but the man chosen by Ben Fogle and James Cracknell to lead them across the Empty Quarter knows these sands like the back of his weatherworn hand. For miles it’s nothing but scrubby bushes and the odd long-lashed camel. As the sun begins to sink, Al Mahri navigates by counting the dunes. They all look identical to me; I’m quietly relieved that Mackay-Lewis has a satellite phone in his bag. We speed over a final hill, and it’s there like a mirage: our beautiful private camp for the night, in one of the most remote places I’ve ever been. A Bedouin tent with a bathroom, long-drop lavatory and pump shower is pitched before an open-air sitting room, its kilims and cosy sofas scattered with cushions. 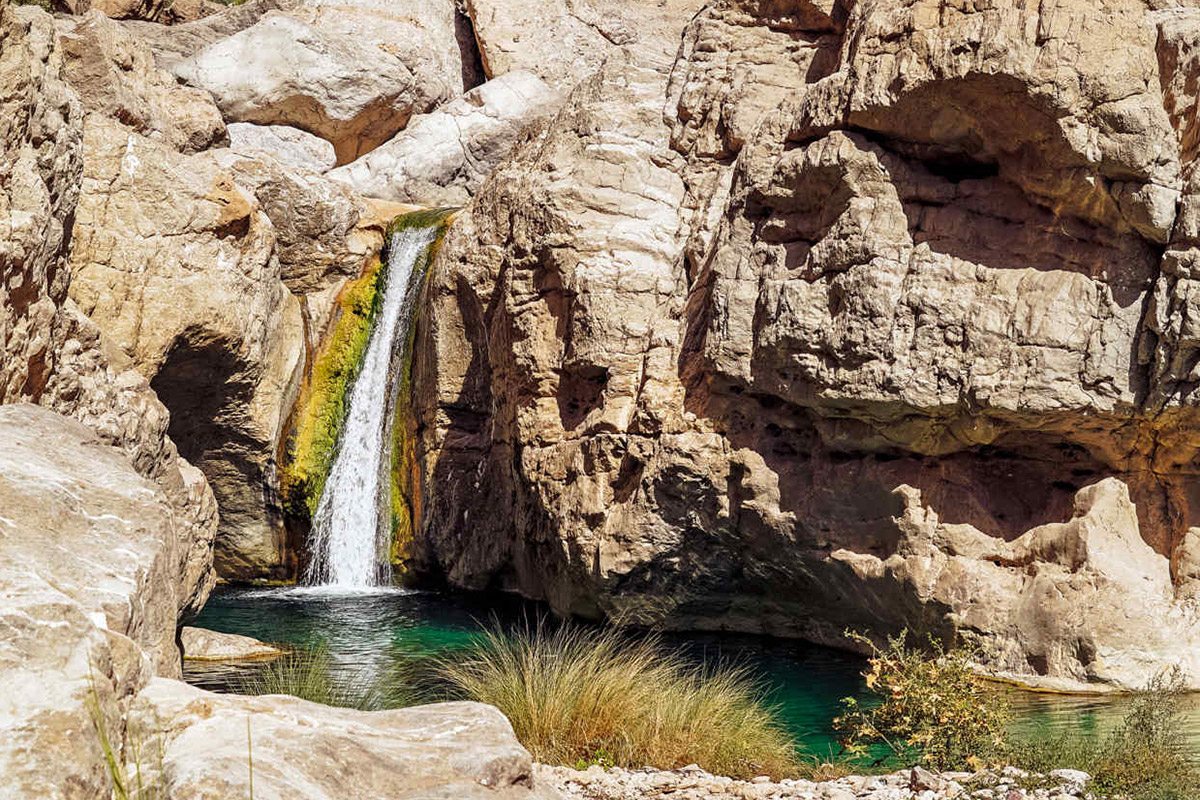 The country’s arid landscape is punctuated by oases like Wadi Bani Khalid, near Ibra | Image: Pelorus

But first, sundowners. We tear up a massive dune angled at 45 degrees. From its vantage point, 250m up, the sense of awe is almost violently overwhelming. I had no idea that I could fall for the desert until I visited the Wadi Rum in Jordan on assignment for How To Spend It two years ago. But the Empty Quarter is the next level of romance and hostility, a place that’s like being stroked and slapped at the same time. And of such size: the largest sand sea in the world – bigger even than France, Germany and Spain combined. Not a holiday destination for agoraphobics, but a dream for anthropophobics; besides our tiny, merry gang, there’s no trace of human life as far as the eye can see. Yet I know that these grains defy borders, stretching into the UAE, Saudi Arabia and Yemen; that two of this country’s neighbours are involved in a war of immense horror. Guilt and gratitude mix as I sip my icy G&T.

The sands turn from millennial pink to classical umber, and we head back to camp. Flickering candles and head torches illuminate a dinner of flatbreads, hummus, salads and chicken. And then it’s lights out, to enjoy a sky unblemished by light pollution, just a beaming Milky Way tantalising with the odd shooting star. 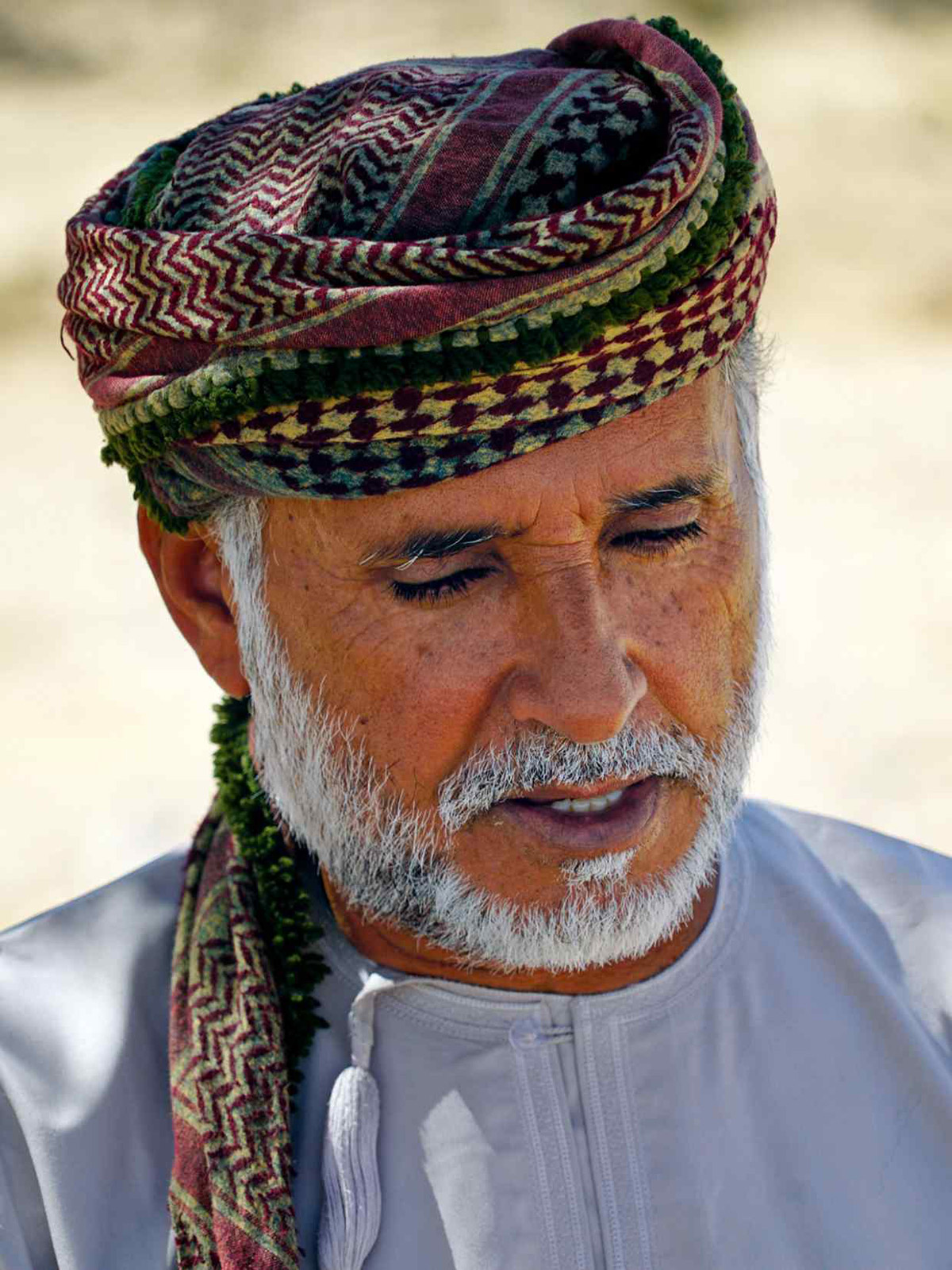 I lie in bed considering the silence. It’s so intense I can hear my eyelashes when I blink. I sniff the wind, but it’s odourless, as clean and pure as alpine water. And I realise that what matters here in this oxymoronic place, stripped of all familiar crutches, is spirit – that is what the desert would really test were I to attempt anything longer than a night’s stay; potentially the rewards could be great. As the officer-explorer Wilfred Thesiger wrote in Arabian Sands: “I believed… that in those empty wastes I could find the peace that comes with solitude, and, among the Bedu, comradeship in a hostile world.”

Over a breakfast of yoghurt, wild Omani honey and an “everything” omelette, we break camp. I’m jolted from my unexpected melancholy at leaving the dunes when Al Mahri grinds the Land Cruiser to a sudden halt. He leaps out and scoops up a knobbly rock, like a huge white truffle, then bashes it until it splits in two – a geode. As I peer into the hollow of this desert treasure, I’m dazzled by curves lined with crystals twinkling as bright as any diamonds. 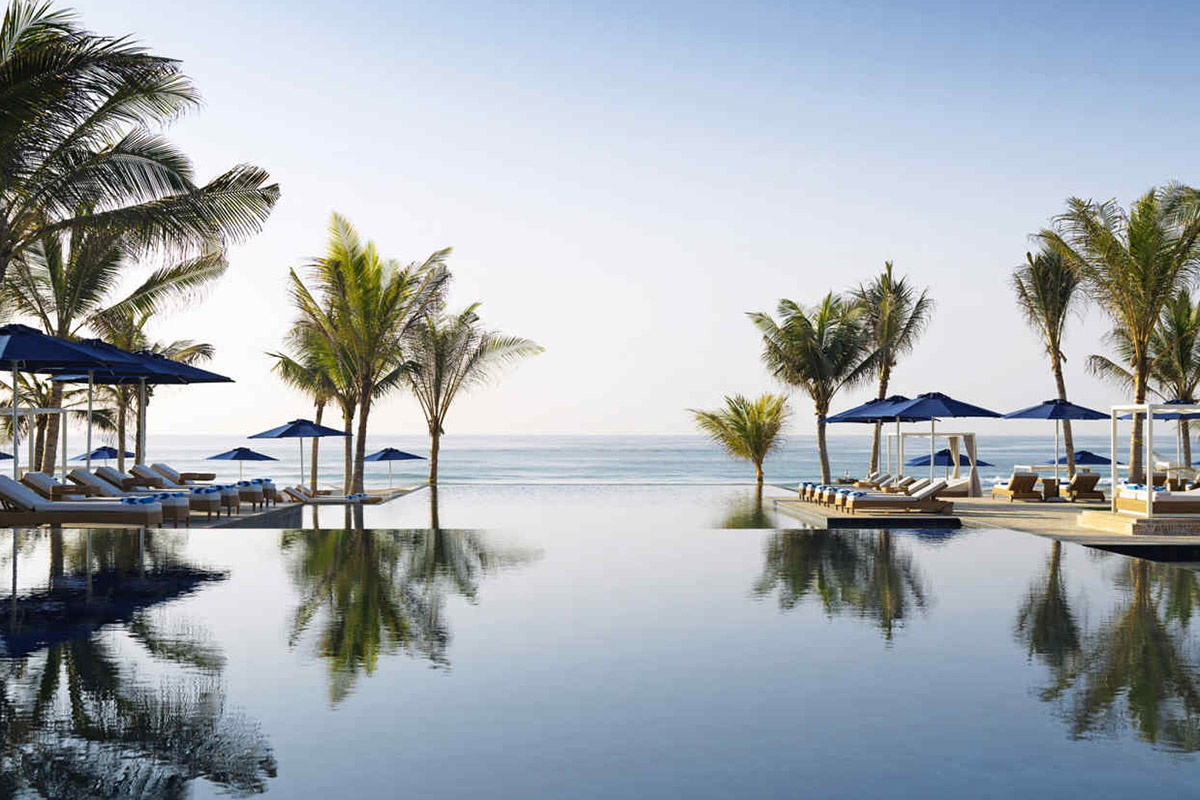 It’s the smell of water that hits first as we approach Wadi Darbat, east of Salalah. I greedily inhale the scents of sodden earth and tamarind trees and their promise of bounty. We picnic overlooking pools fed by gushing waterfalls; a farmer waters his camels. It’s the Bible, via Disney. Over dates and coffee, Mackay-Lewis springs a surprise: back in London, when we discussed what I hoped to experience, I’d mentioned that conservation is my thing. The Pelorus team has come up trumps, leaping through bureaucratic hoops to arrange a private meeting with Khaled Al Hikmani, who has dedicated his life to protecting the endangered Arabian leopard, of which there are thought to be fewer than 250 left in the wild.

We meet on a cliff edge near the 2,100m-high Jebel Samhan mountains, overlooking Salalah and the Arabian Sea beyond. Al Hikmani opens: “In 14 years I’ve only seen three leopards. But just hearing the roar makes my heart beat faster.” Like a mountain goat in flip-flops, he skips across the jagged peaks and down precarious passes, along a route well pawed by local leopards, where he has set up camera traps. Despite my sturdy hiking shoes and (so I thought) head for heights, I crawl slowly, gripping the rock face. Not surprisingly, having been a target of humans for so long, the leopard is shy. But Mackay-Lewis is formulating plans with Al Hikmani for future tours: this naturalists’ hide and seek, similar to that played by conservationists and big-cat enthusiasts with snow leopards in the Himalayas, could have significant conservation potential here. 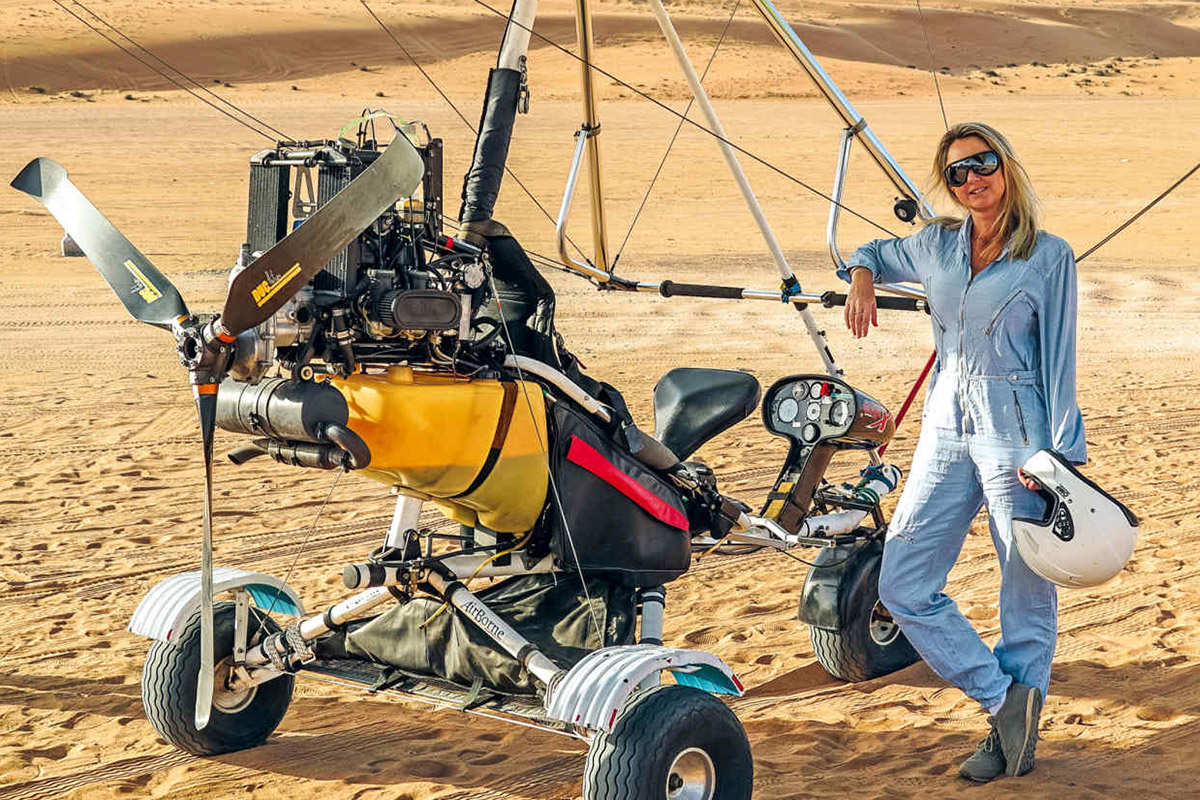 The author prepares for her microlight flight in Wahiba Sands | Image: Pelorus

A massage and a dip in the vast infinity pool at the Anantara in Salalah – the area’s swankest hotel, until a new Alila opens next year – sets me up for an early morning. I’m met by dive master Rabie Ali and we off-road through empty dunes to a deserted beach, with talcum sand and rocky outcrops sheltering otherworldly blue water. We dive the coast: pretty fish, colourful coral, massive eels. It’s nice, if not terribly testing. But the post-dive chat tantalises with tales of whale pods and the Al Hallaniyat islands, where the underwater world is said to be sublime. There’s no time this trip, but X marks the spot.

The following daybreak, moon still bright in an inky sky, we fly to Muscat and immediately hop into another Land Cruiser, passing through Ibra (near to Wadi Bani Khalid oasis) to admire its famed racing camels being exercised, before ascending over the Al Hajar mountain range. And suddenly, another world of sand stretches before us: the Wahiba desert. Its marmalade-coloured dunes, smaller than those in the Empty Quarter, are dotted with fixed Bedouin camps, desert hotels and fleets of 4x4s bearing thrillseekers to off-road adventures. Having started in Rub al Khali, this definitely feels rather suburban. But I’m distracted by another Pelorus-arranged surprise: a microlight, a contraption that isn’t far off da Vinci’s drawings of a flying machine, to take me high above the dunes. I hop in just behind the pilot and off we roar. Tiny camels cast long shadows; the sand extends beyond the horizon, the odd turbulence bump adding to the thrill. It’s yet another unexpected perspective.

Marvelling at its beauty from the silence up high, I’m filled with an almost sacred sense of humility, mind and ego silenced. 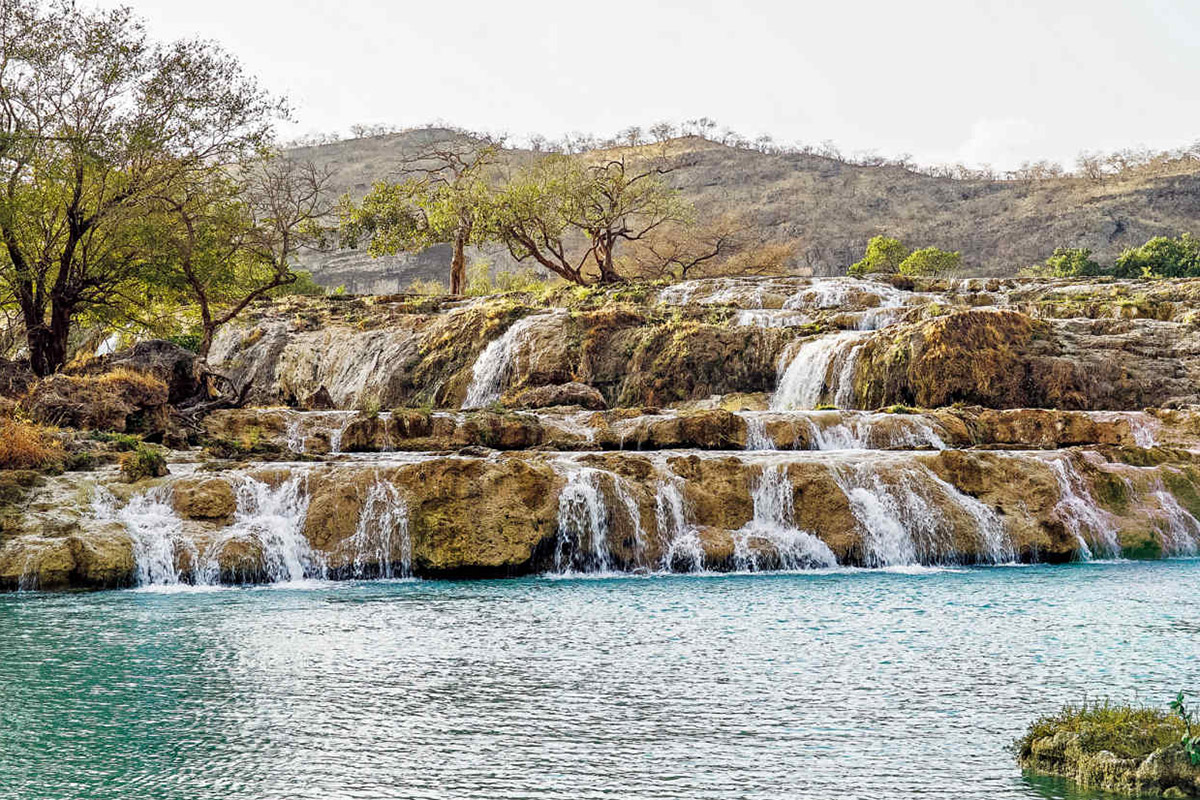 The waterfalls of Wadi Darbat, east of Salalah | Image: Pelorus

My final night closes the adventure with an especially pleasing asymmetry. My first supper was with a nomad born in a cave and my last is with His Highness Taimur Al Said, the sultan’s nephew, who hosts a candlelit dinner for me at a sumptuous tented camp, my home for a night. Over lamb shwar, slow-cooked for 24 hours in glowing embers, he speaks about his favourite spots still to be discovered by the world: shimmering salt pans, white-sugar dunes, secret wadis and the Seventh Hole, a cave accessed by abseiling 120m below the Salmah Plateau.

We plot future adventures, until my host bids me goodnight. “Desert sleep is the best,” he says with a smile. After the ultimate shower – piping hot, beneath the stars – I slip between linen sheets, delighted to discover a hot‑water bottle sharing my bed. I reflect on how time expands when you’re immersed in the new, a multitude of first-time encounters and viewpoints. My asymmetrical adventure didn’t just give me a super-dimensional picture of Oman; it stretched the very seconds of all four of my days. And that was my last thought before what was, indeed, probably the best night’s sleep of my life.