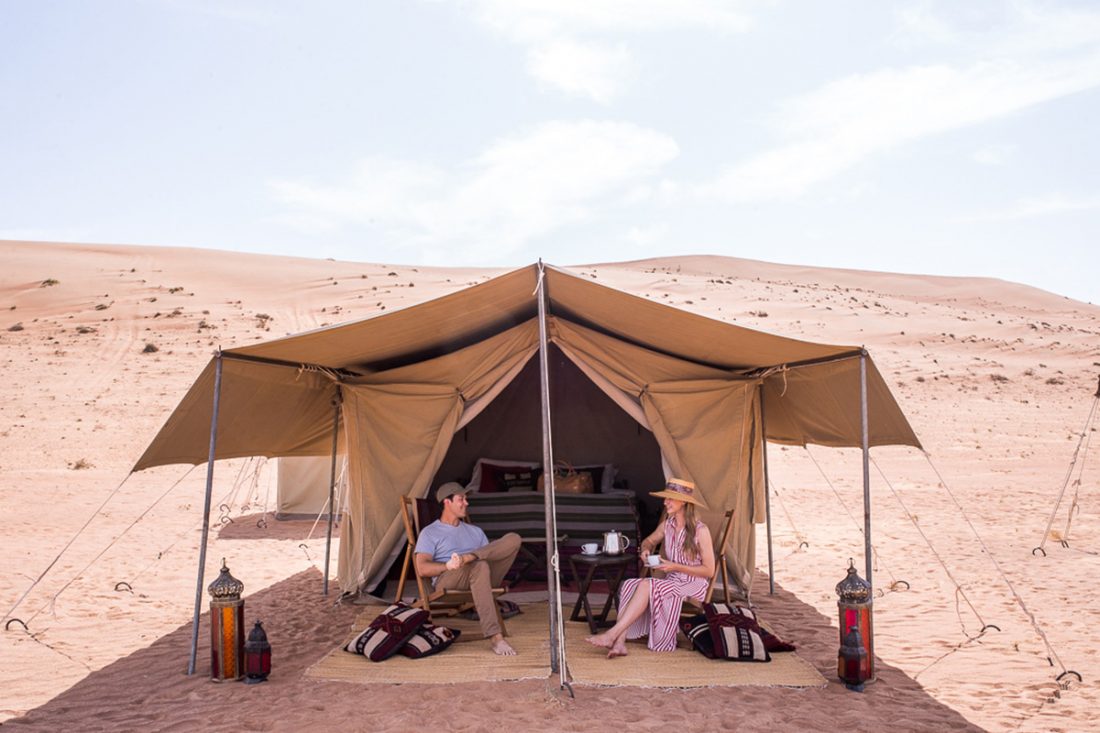 It feels like Oman has been popping up as a “must see” destination recently, so upon the recommendation of friends we started our journey through the Middle East in Muscat. Oman wasn’t as I expected at all.

Up until 40 years ago the capital city of Muscat was a sleepy fishing village resisting contact with the outside world until the progressive Sultan Qaboos staged a palace coup and overthrew his father in 1970, harnessing the country’s oil revenue for modernization and development projects. (When he took power the country only had 6 km of paved roads – total!) Today, improvements like roads, hospitals and schools are in place, but Muscat still feels like a relatively sleepy capital, undiscovered by the modern tourist. You’ll only need a day or two to explore the city, before heading out to the desert for the real event.

My favorite experience from our trip to Oman, was an overnight trip into the Wahiba Sands with Hud Hud Travels. Like taking a page out of One Thousand and One Nights, getting out into the desert was the perfect way to experience Arabian peninsula as it’s been – largely undisturbed – for millennia.

Driving a 4×4 through the sand is exhilarating and I think the trip out to the desert was worth it just for that. We were caravanning with another car, which got stuck on a dune right at the edge of camp – if you were watching my Instagram stories that day I’m sure you remember the happy chaos of tethering our vehicle to theirs to pull them off. Seriously so much fun.

We arrived in camp at 4pm, after the heat of the day and were greeted with refreshing lime and mint sodas. The camp uses two types of tents throughout the year depending on the season. During our visit we slept in African tents because they are much cooler during the hot summer months, in contrast to the typical bedouin tents made of goat hair (which are apparently, quite warm). The beds were comfy and made up with crisp cotton sheets and folding tables on each side stocked with flashlights and other camping necessities, as well as a few hooks around to hang our jackets. Our bathroom was a tented stall behind our sleeping tent, with a pit latrine, hand wash basin with thermoses of hot and lukewarm water, and a wooden stand with a bucket over it that could be filled with hot water from the kitchen when we wanted a shower. Everyone that showered at camp raved about the experience – who doesn’t love an outdoor shower? 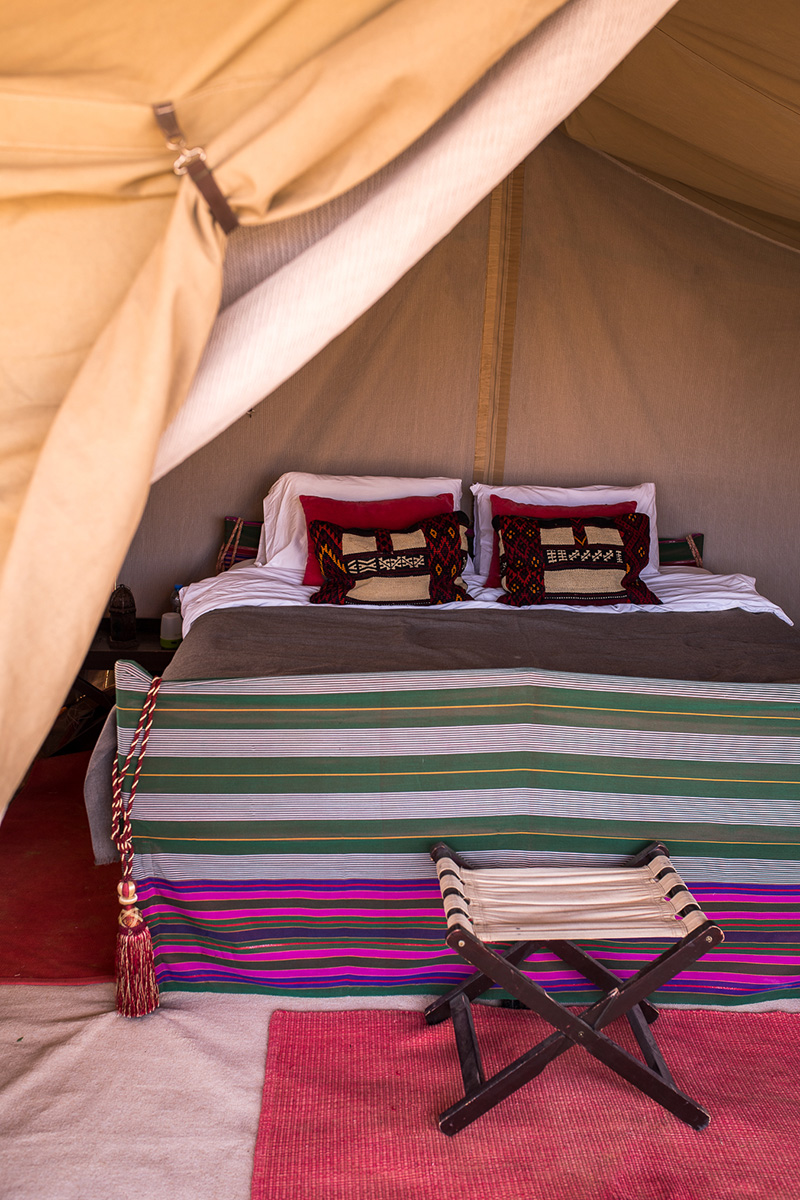 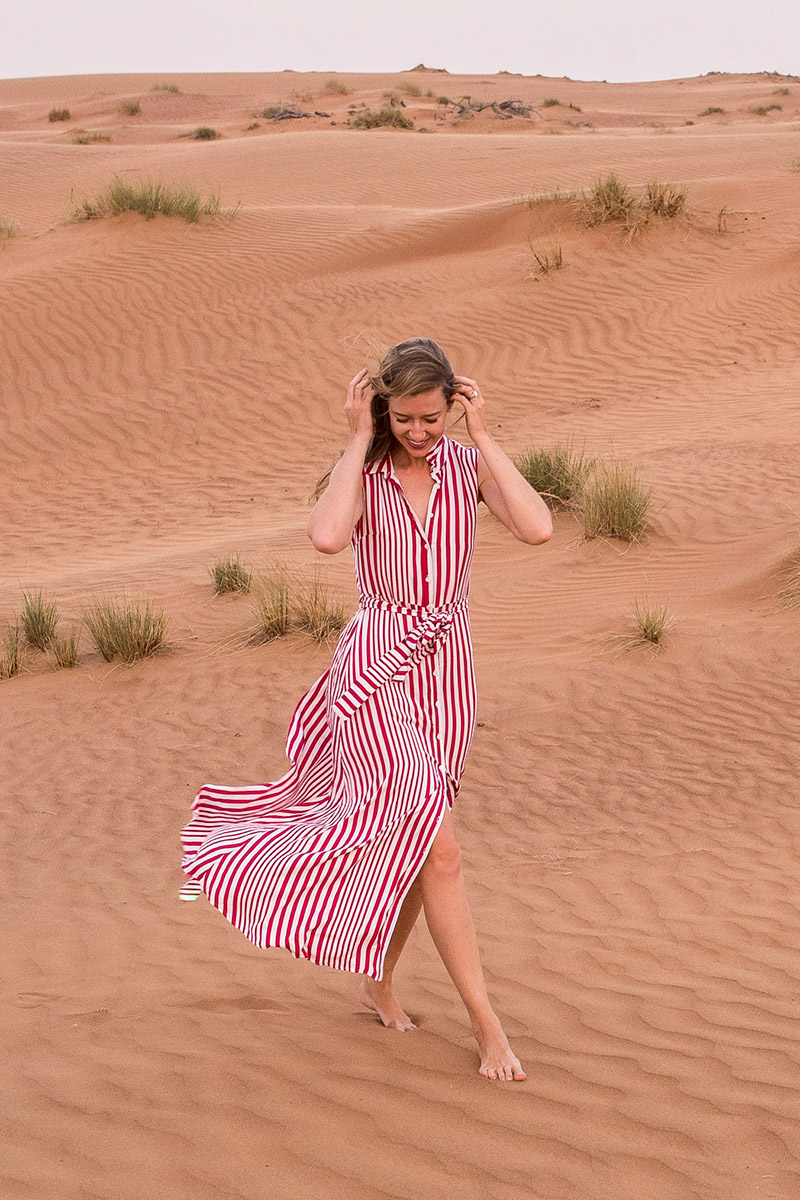 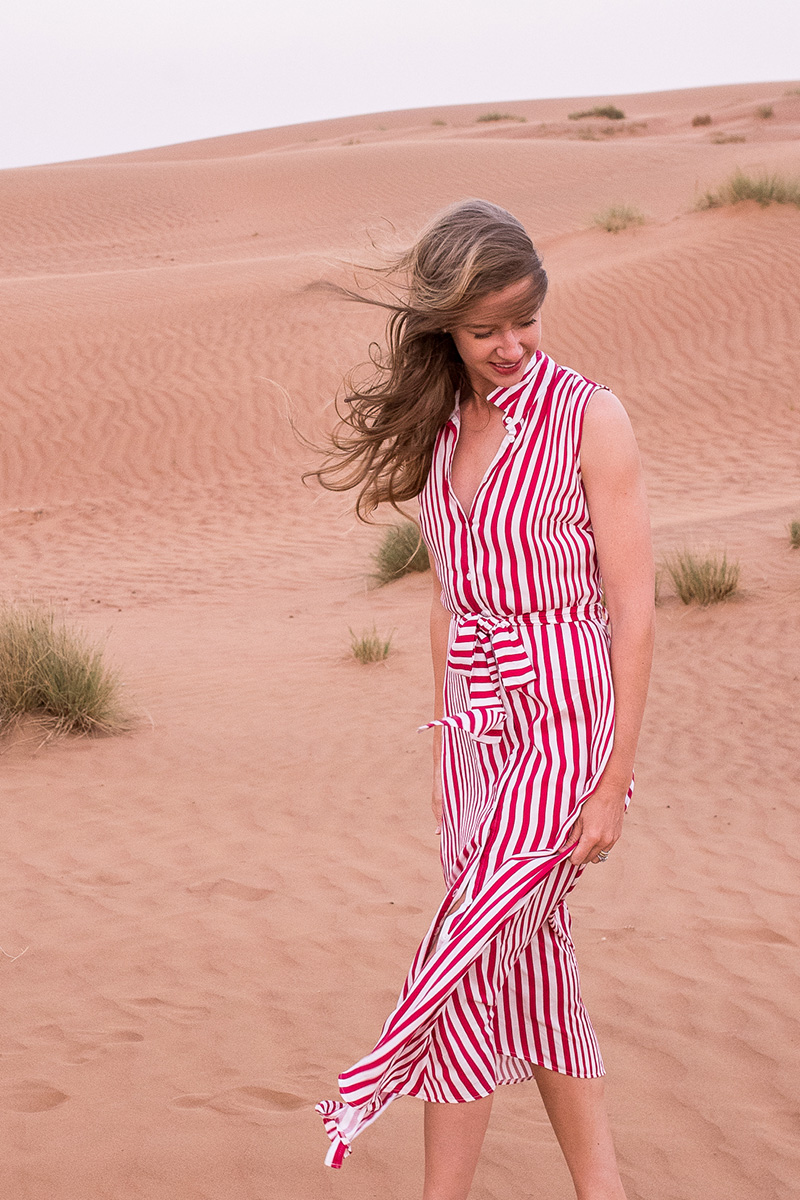 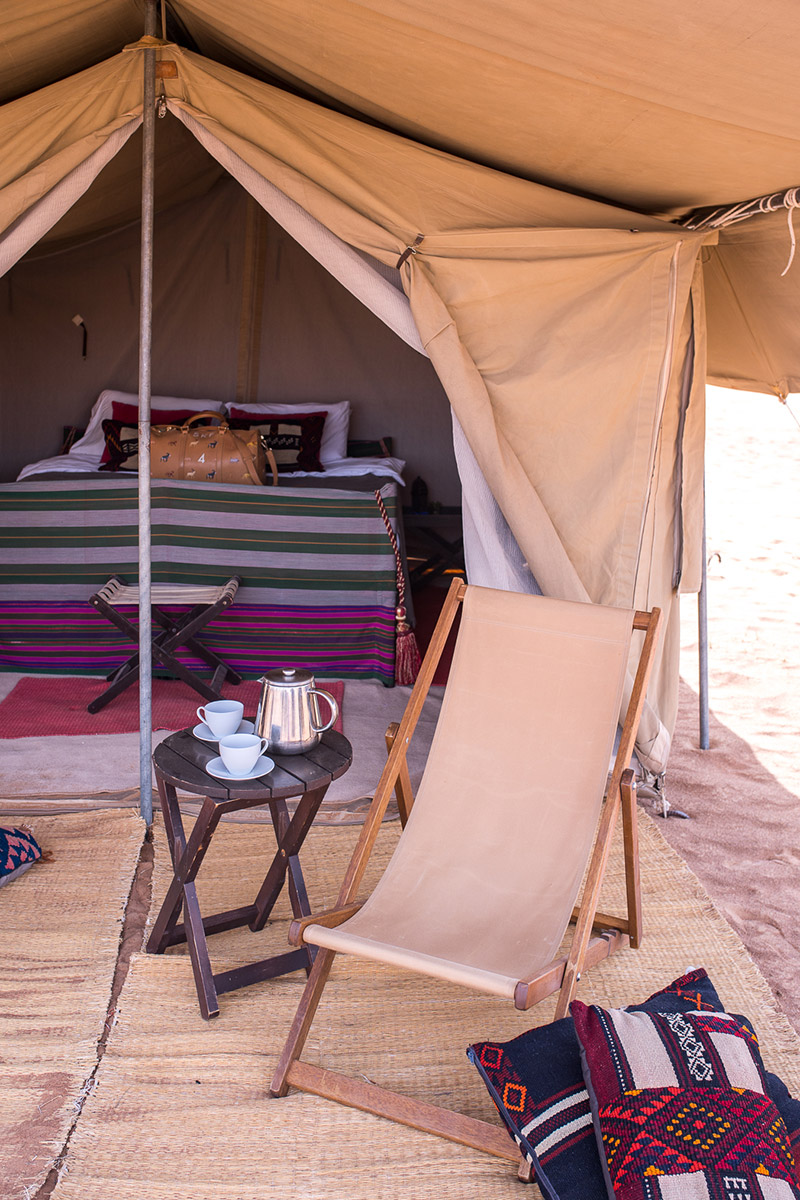 The main tent is stocked with lots of games from bocce to “sleds” you can take up the dunes to go sand boarding.

We chose to set off with our camp manager, Patrick, to watch the sunset from his favorite vantage point, a short 15 minute drive from camp. As we pulled away from camp, the wind started to kick up and by the time we reached Patrick’s outlook the sky was blurred by a moderate sandstorm and the tracks from our rover were being wiped away by the wind. He said they hadn’t a sandstorm in two months and apologized that out sunset was ruined – but we loved it and told him we had just been discussing how cool it would be to experience one. The sand in the atmosphere created an otherworldly pink glow which was just beautiful. 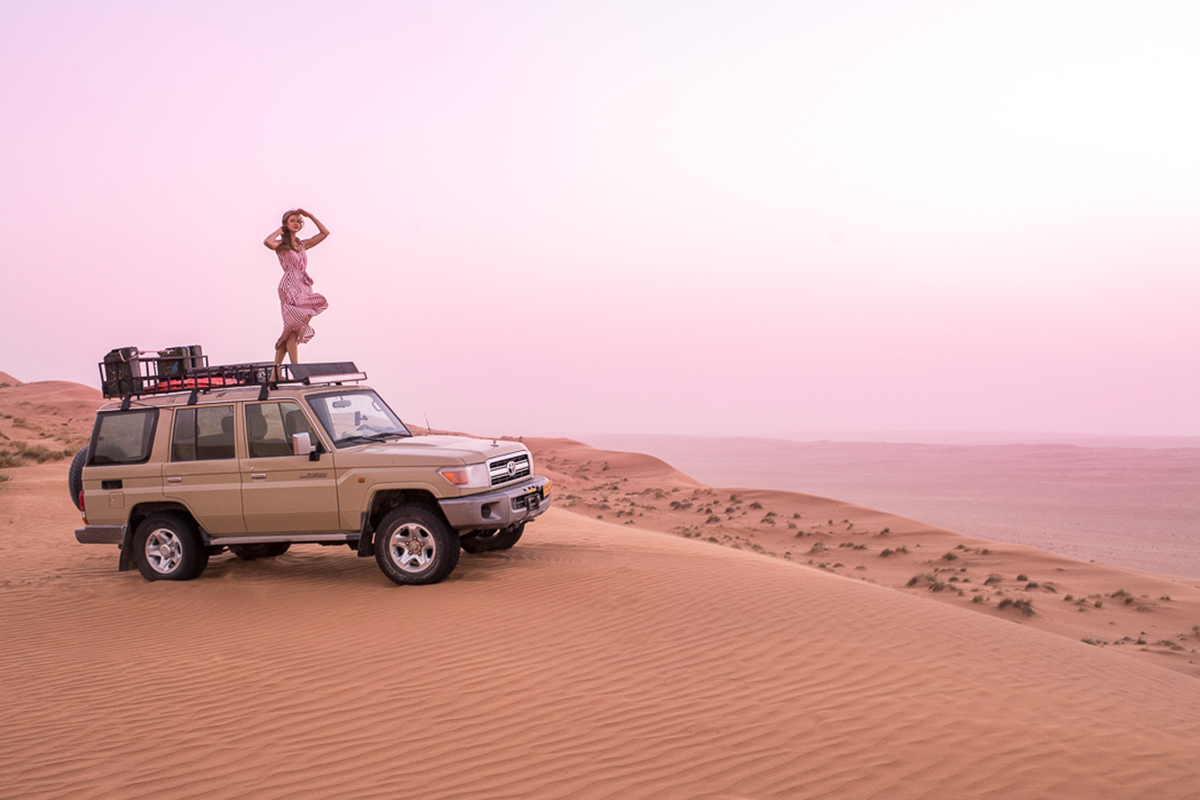 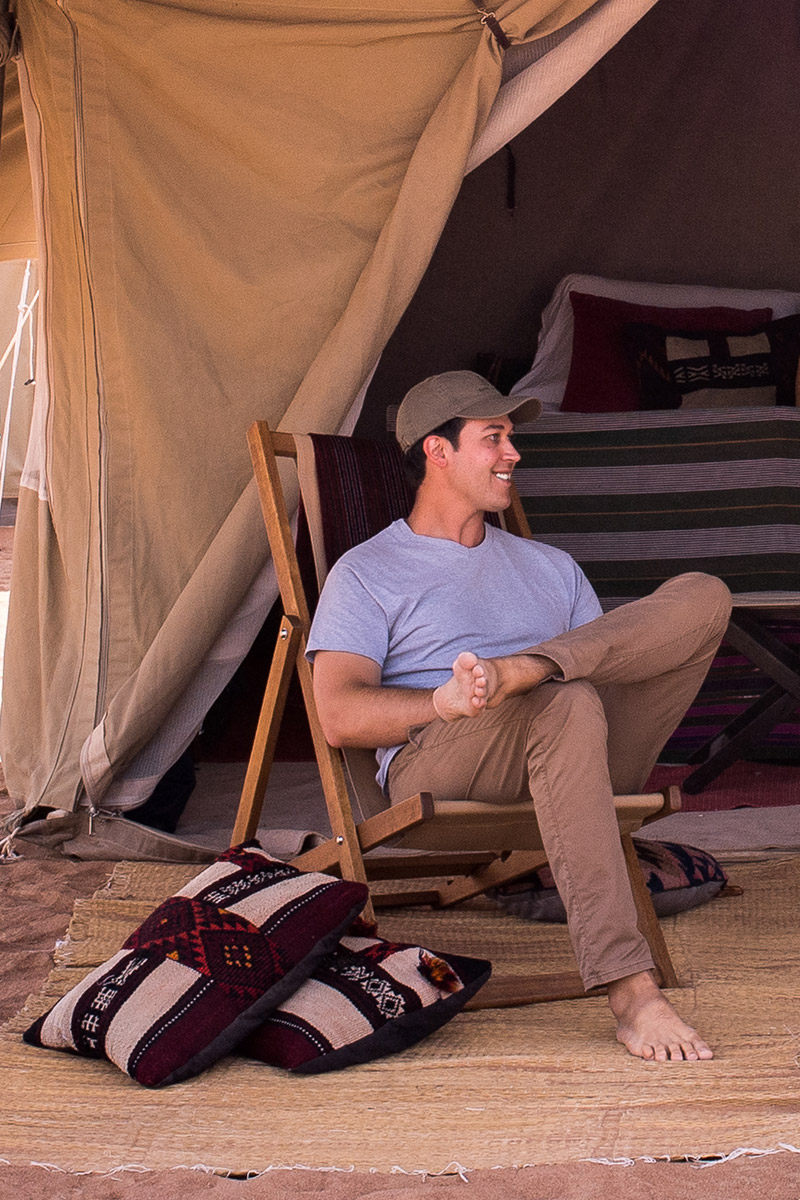 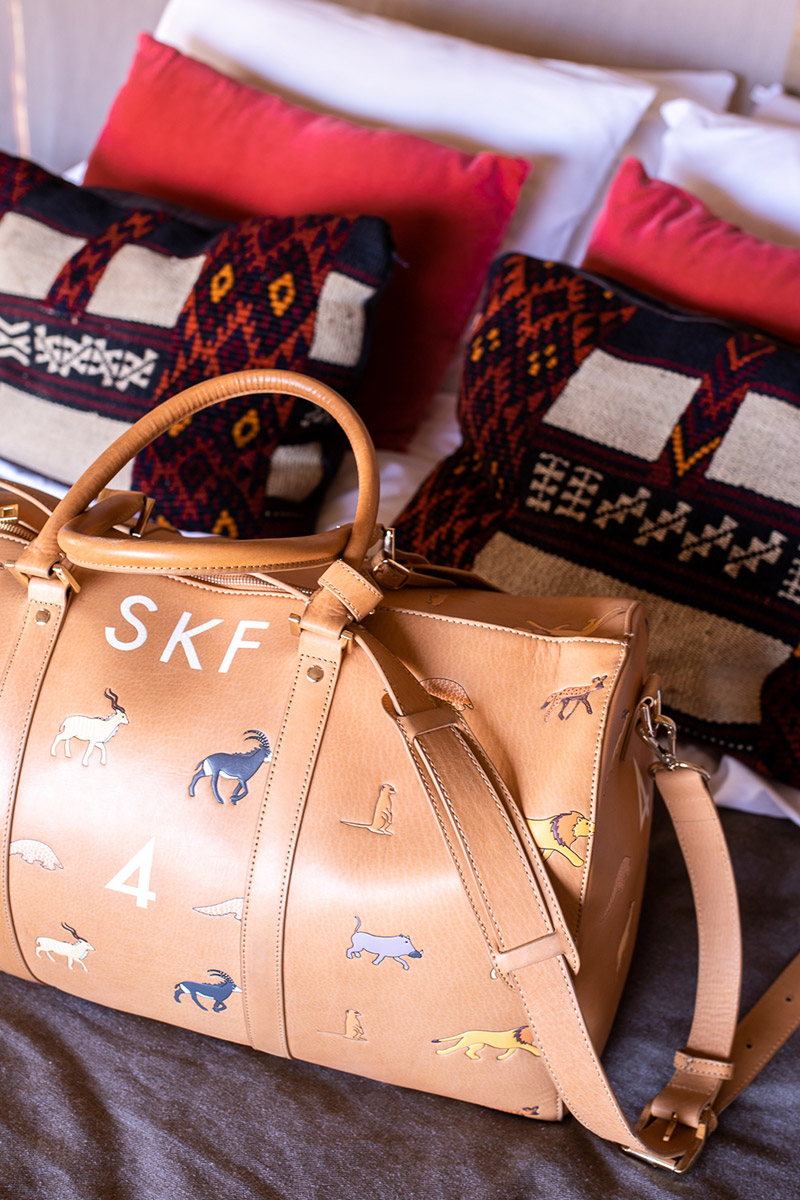 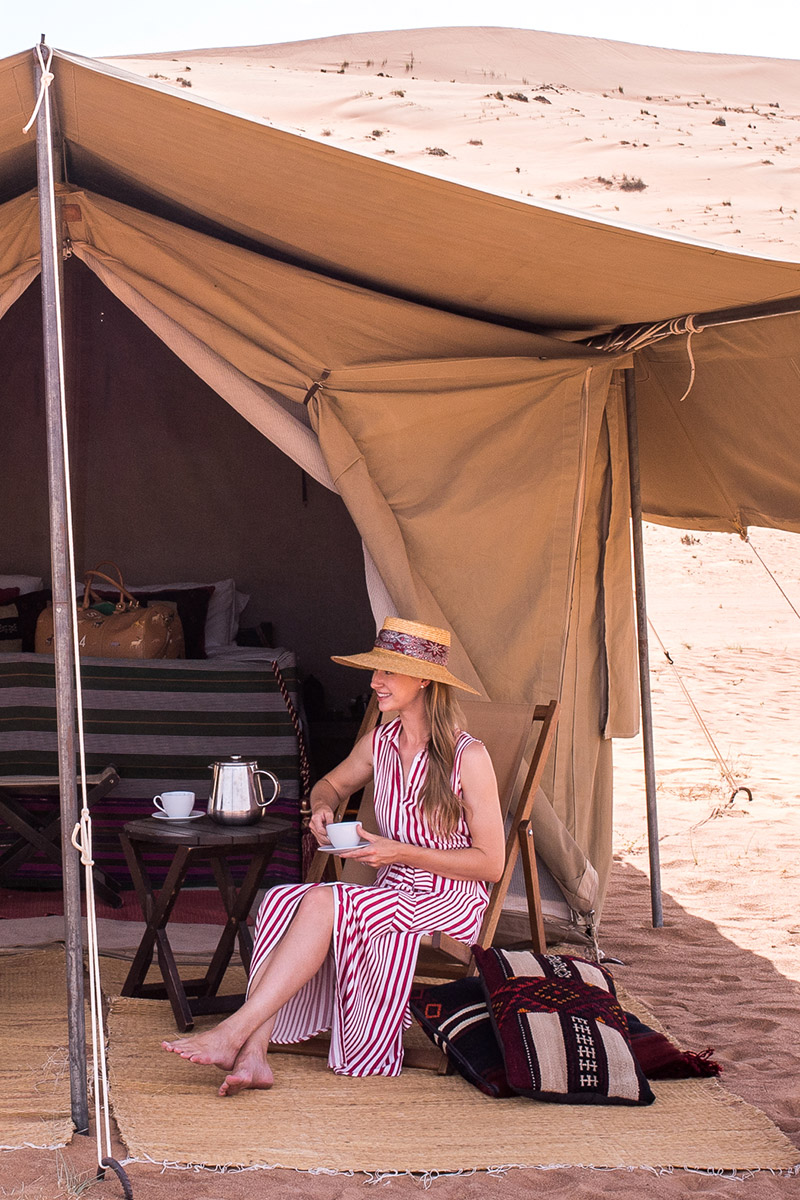 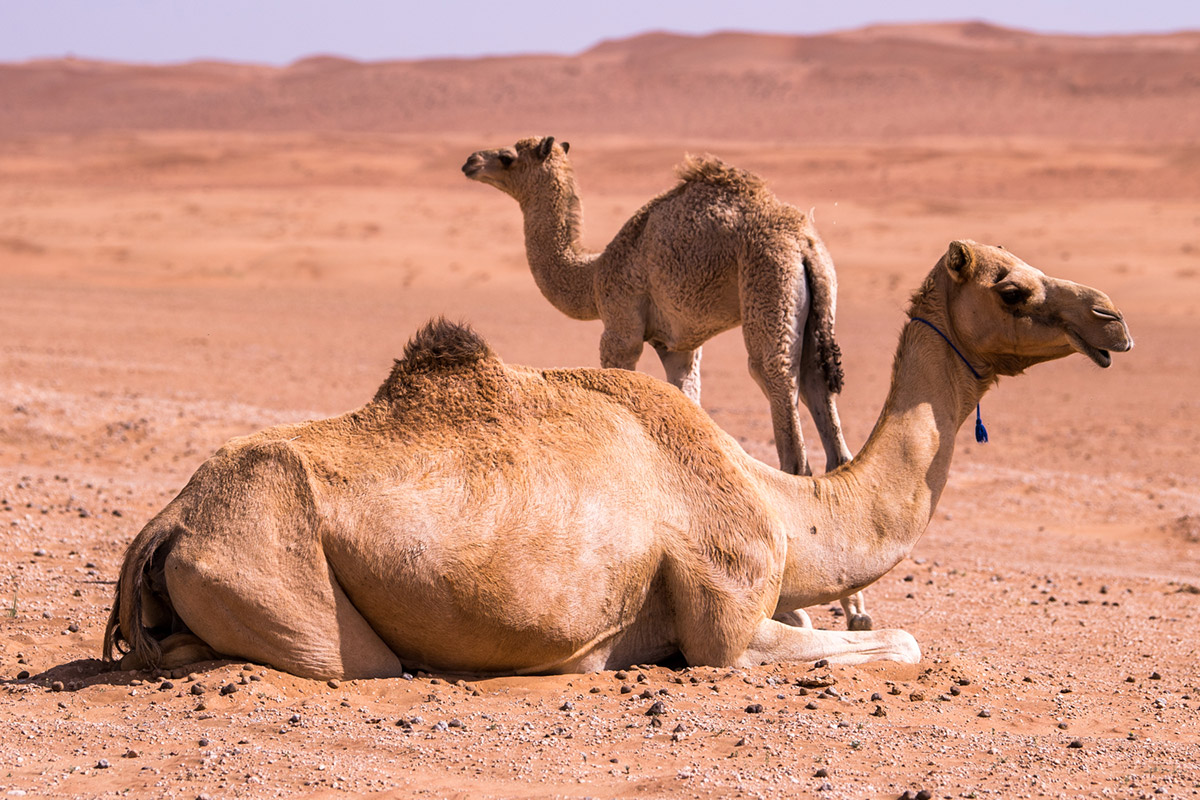 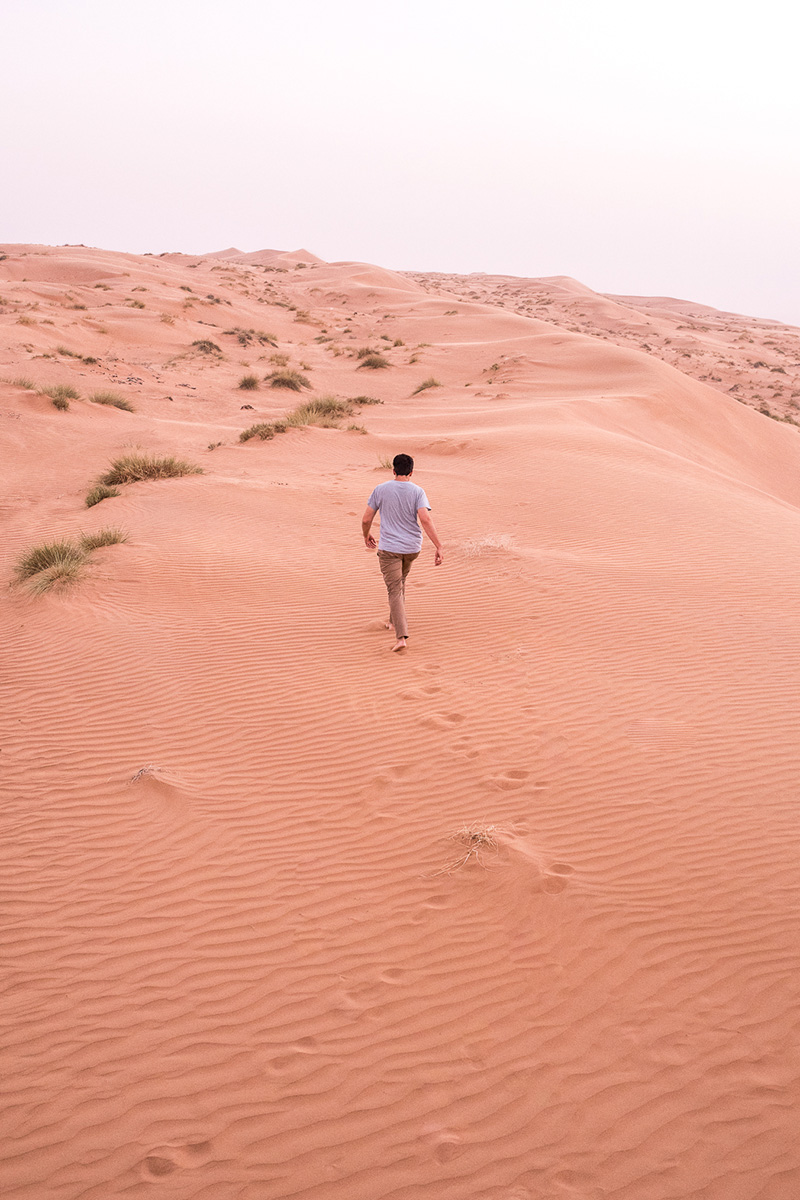 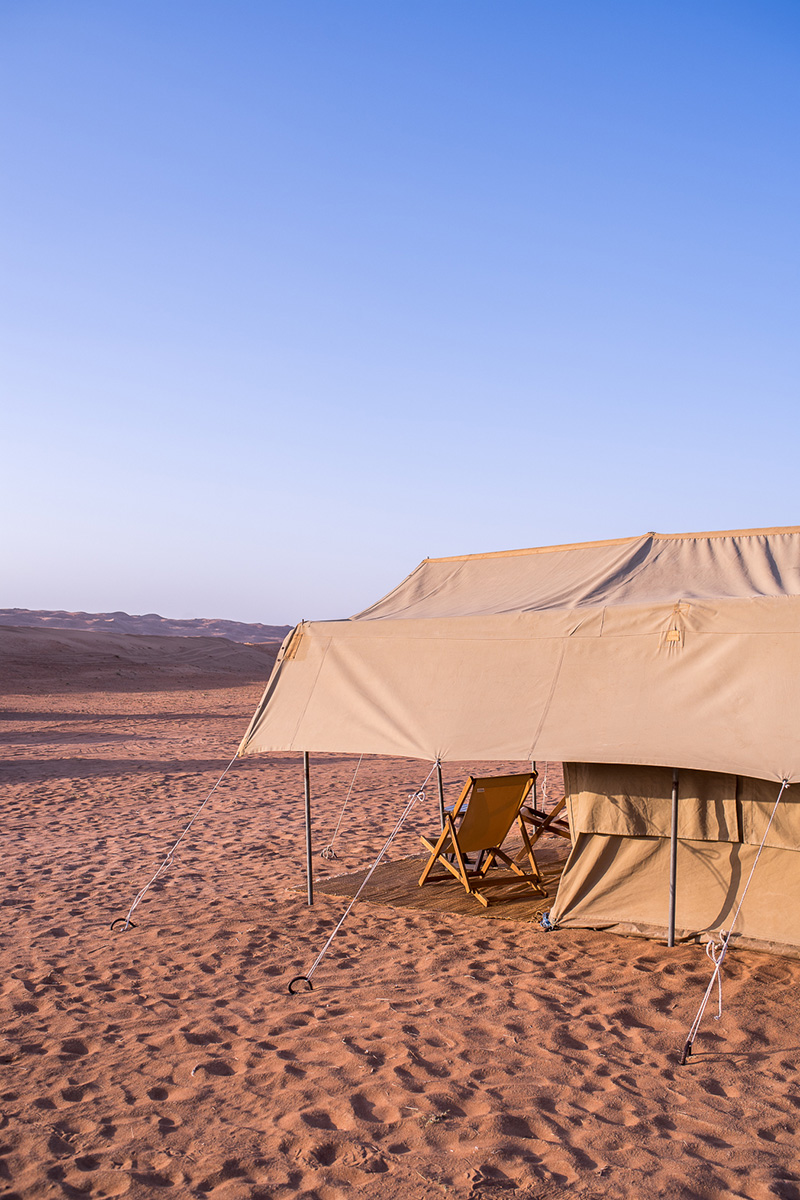 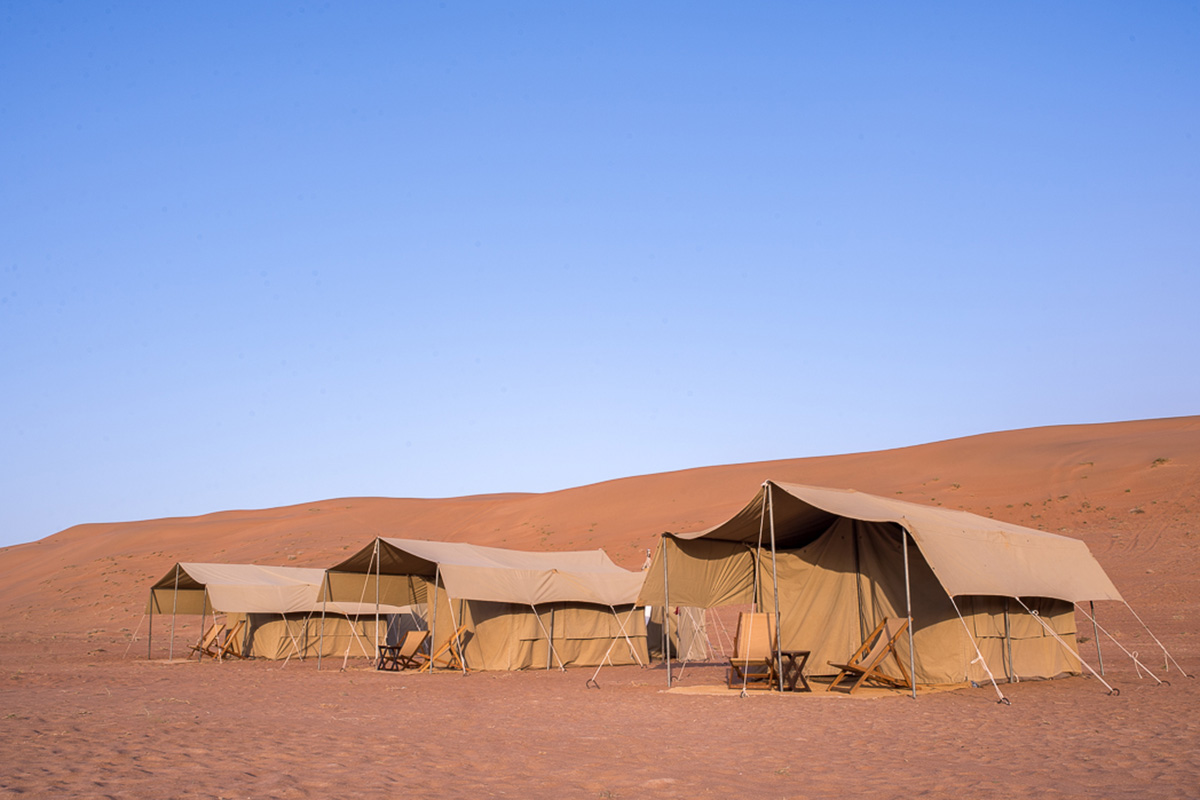 Dinner was communal and moved from under the stars into the main tent to avoid the swirling sand. I honestly didn’t even know the names for what I was eating but every dish was brilliant, especially the lamb, all cooked in the camp’s tiny mobile kitchen. In true bedouin fashion, Hud Hud moves its camps every 10 days to ensure their impact on the environment is minimal. 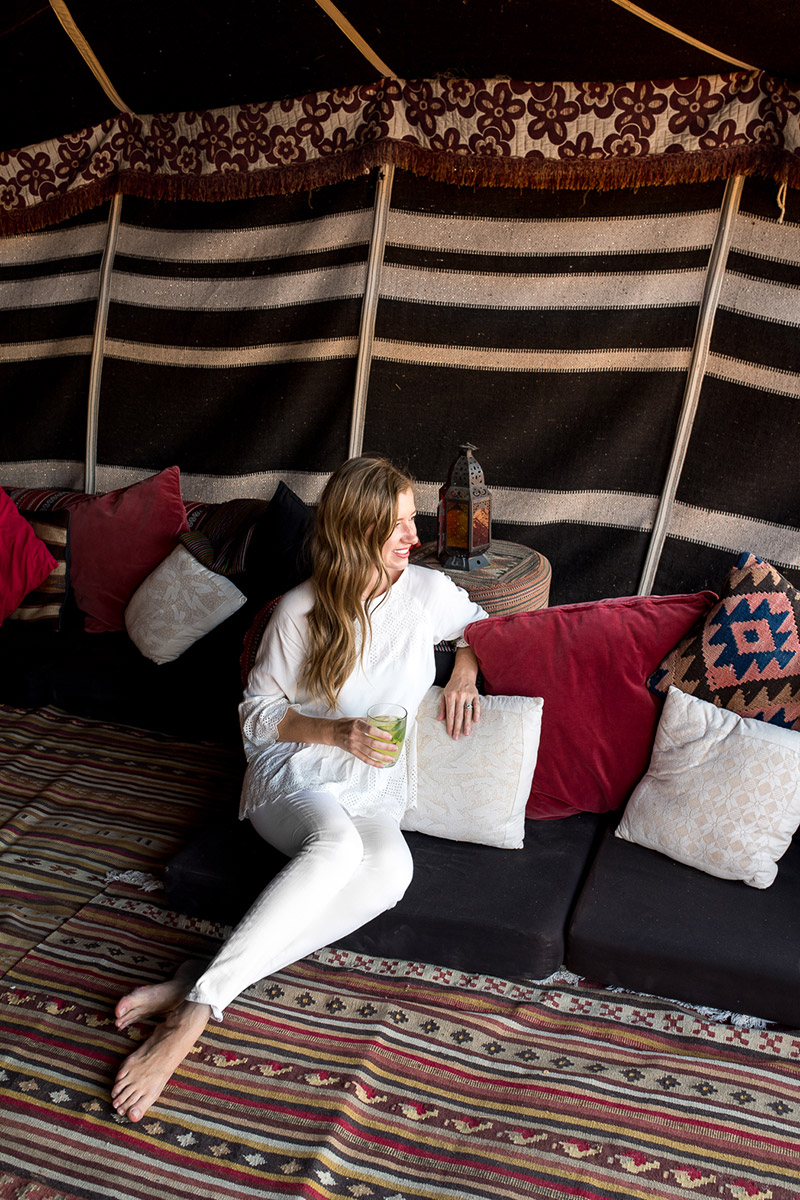 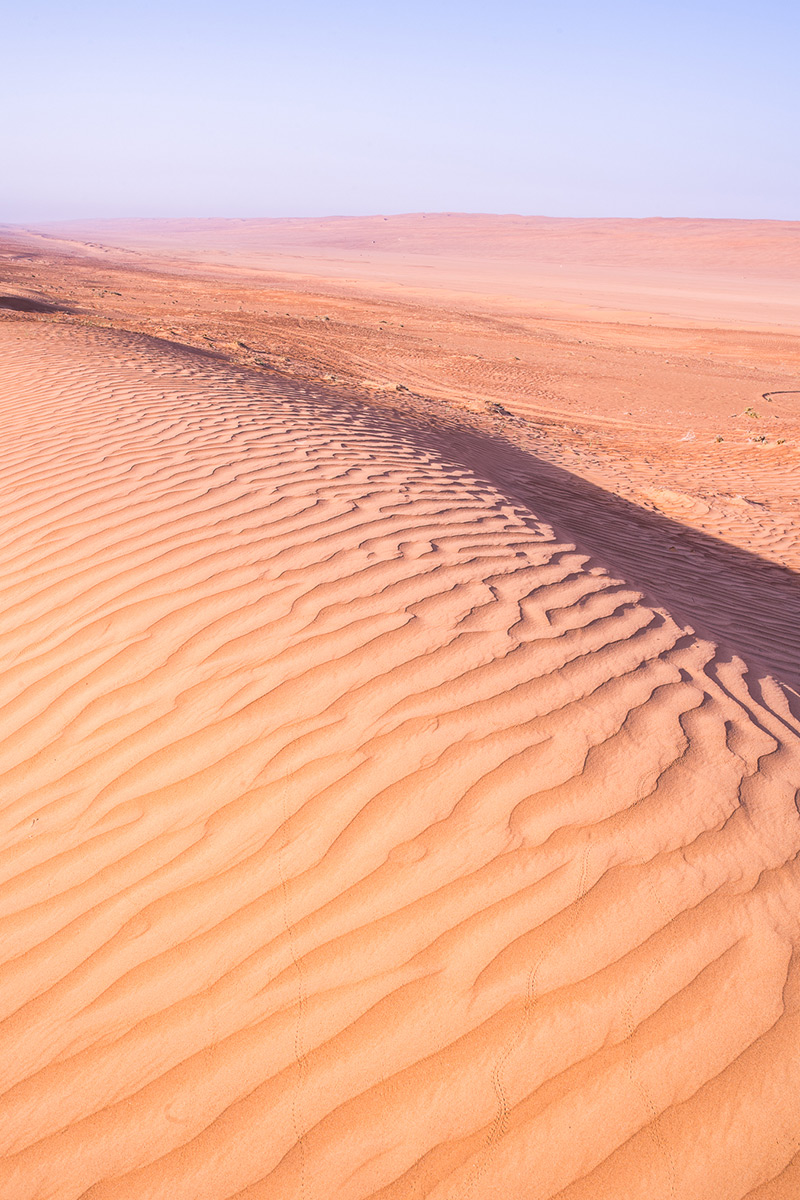 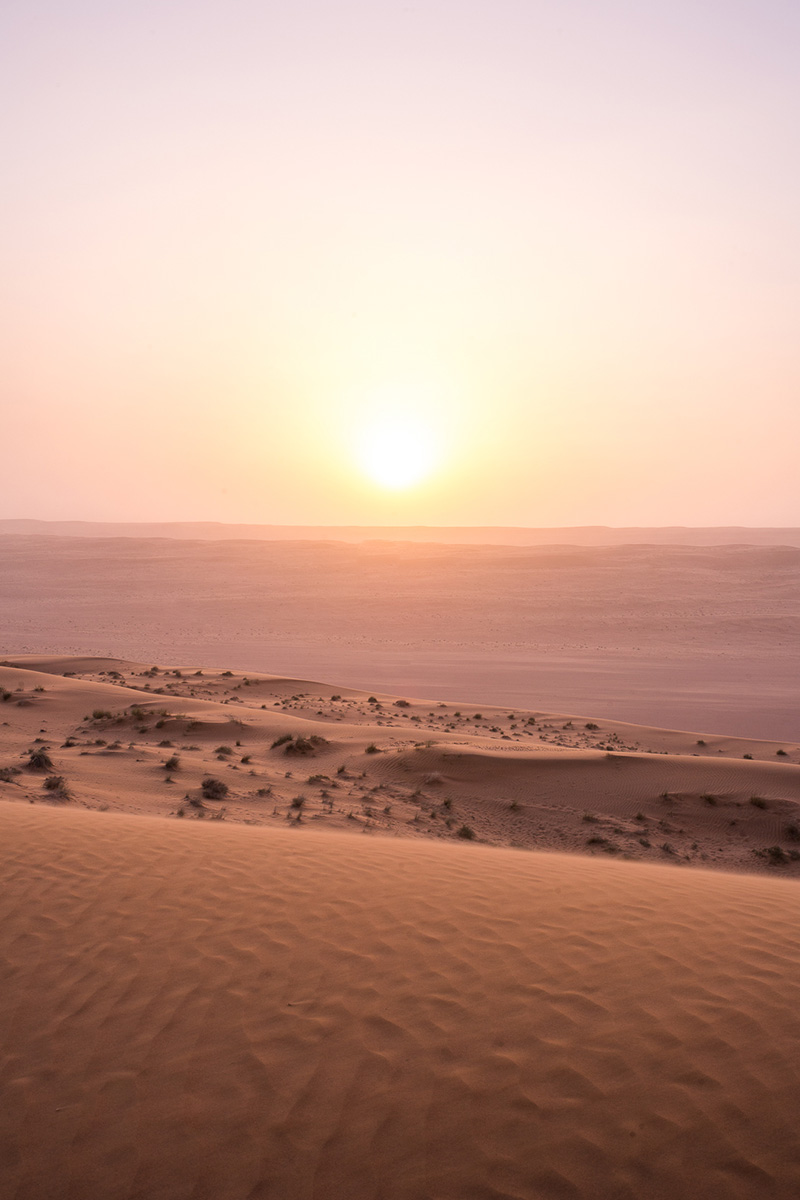 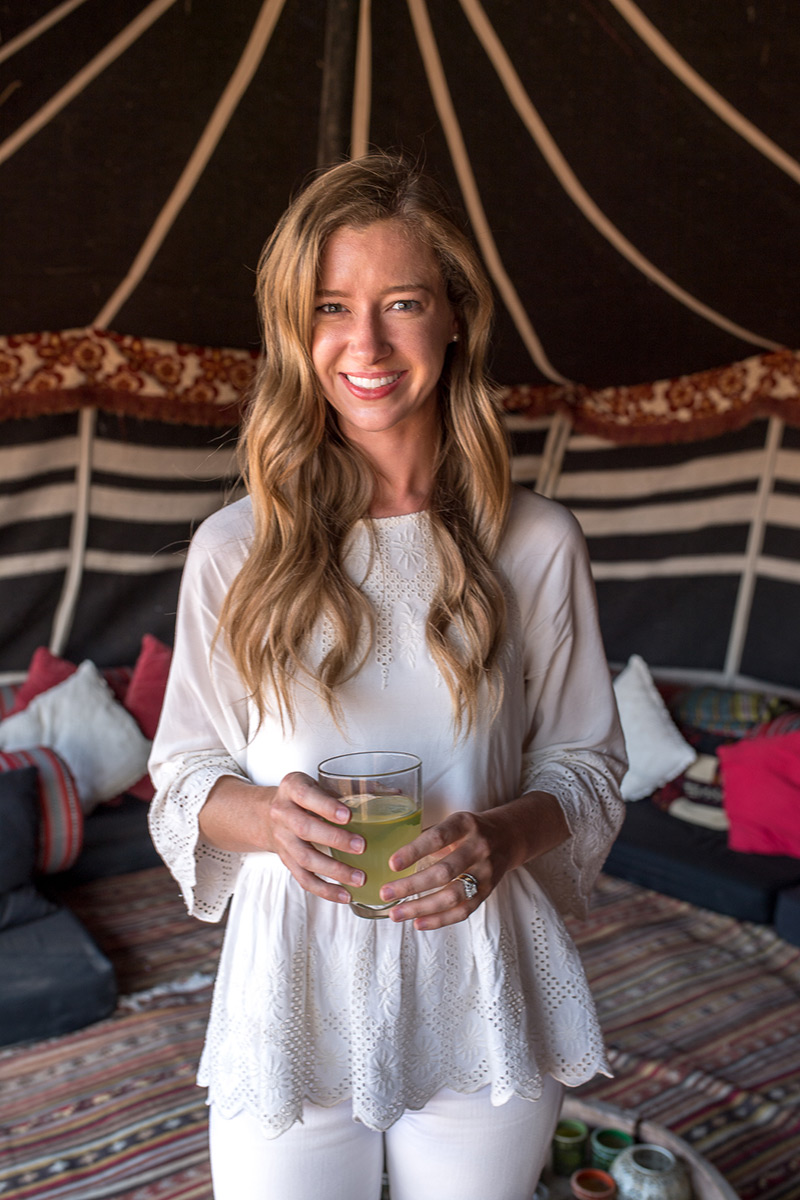 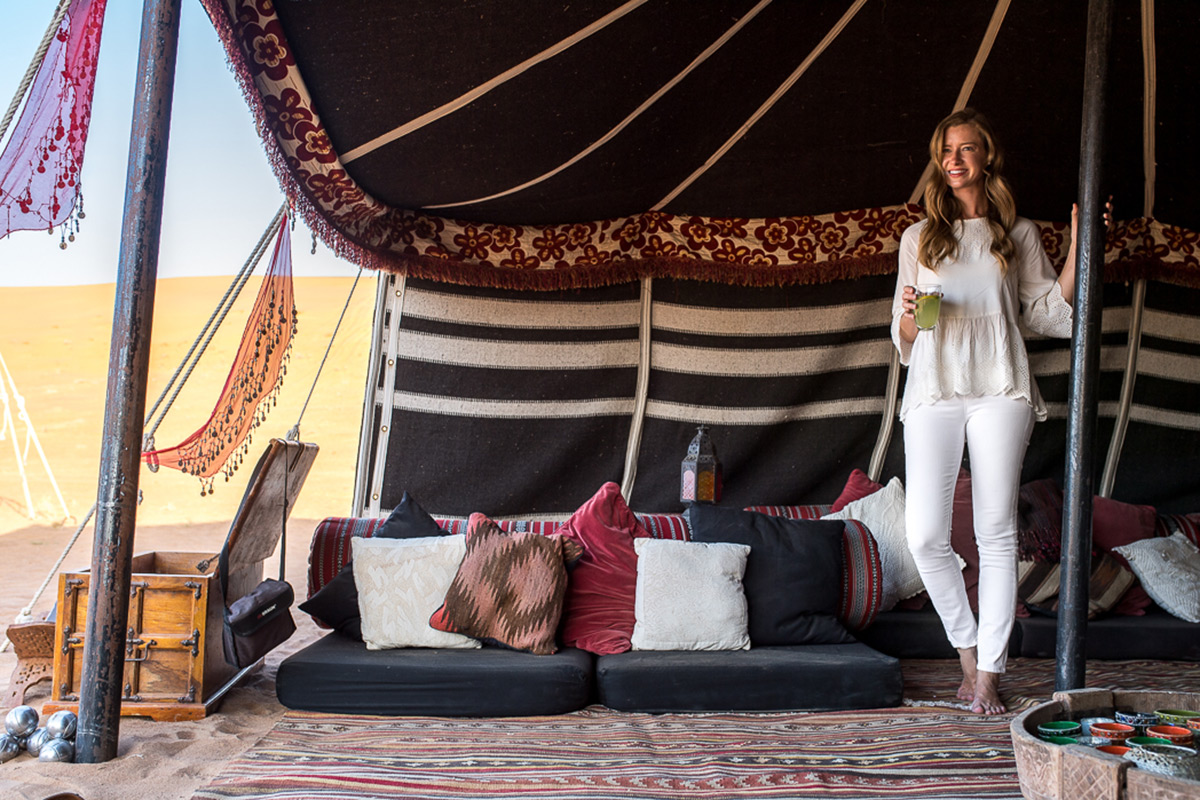 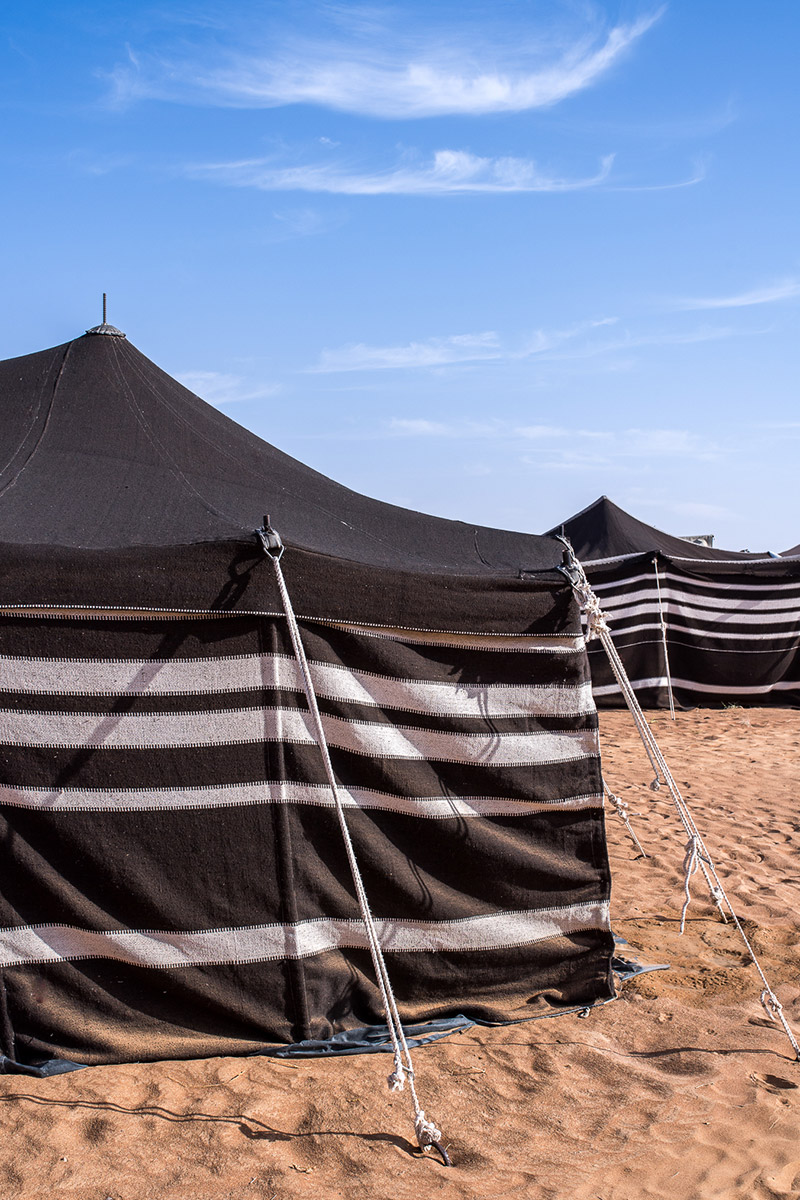 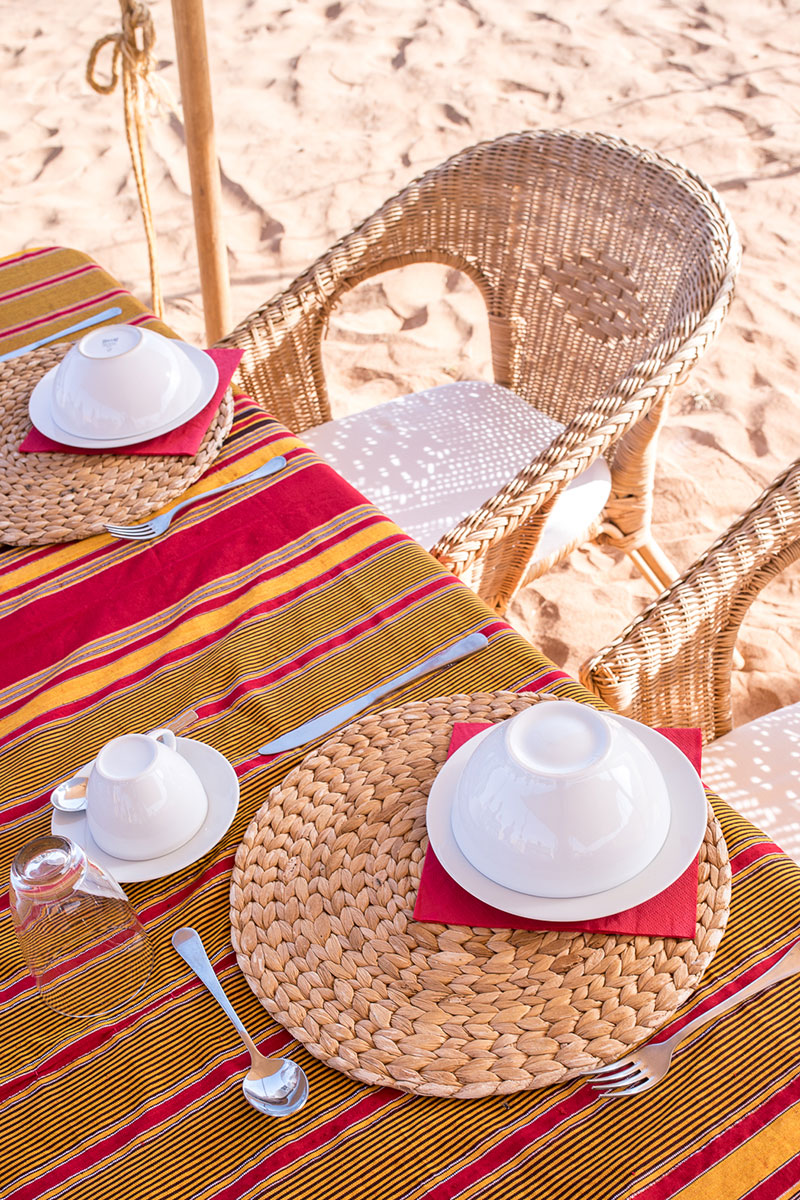 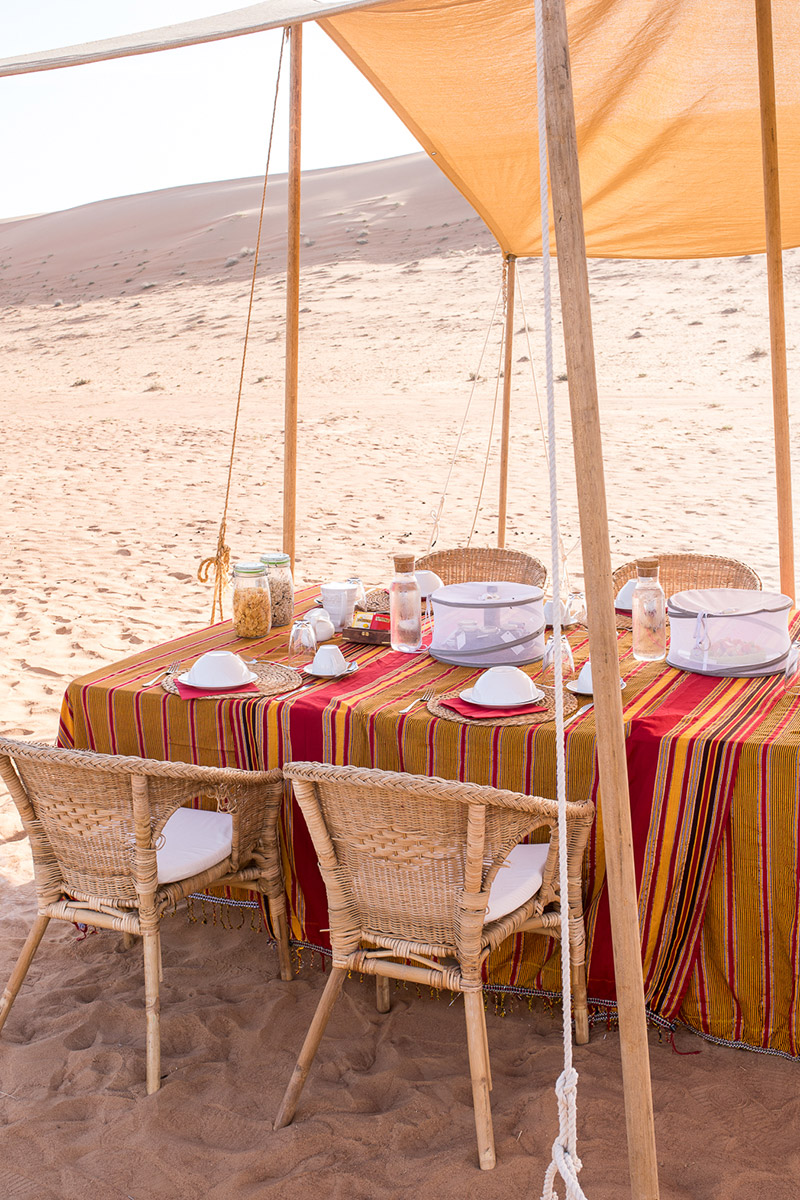 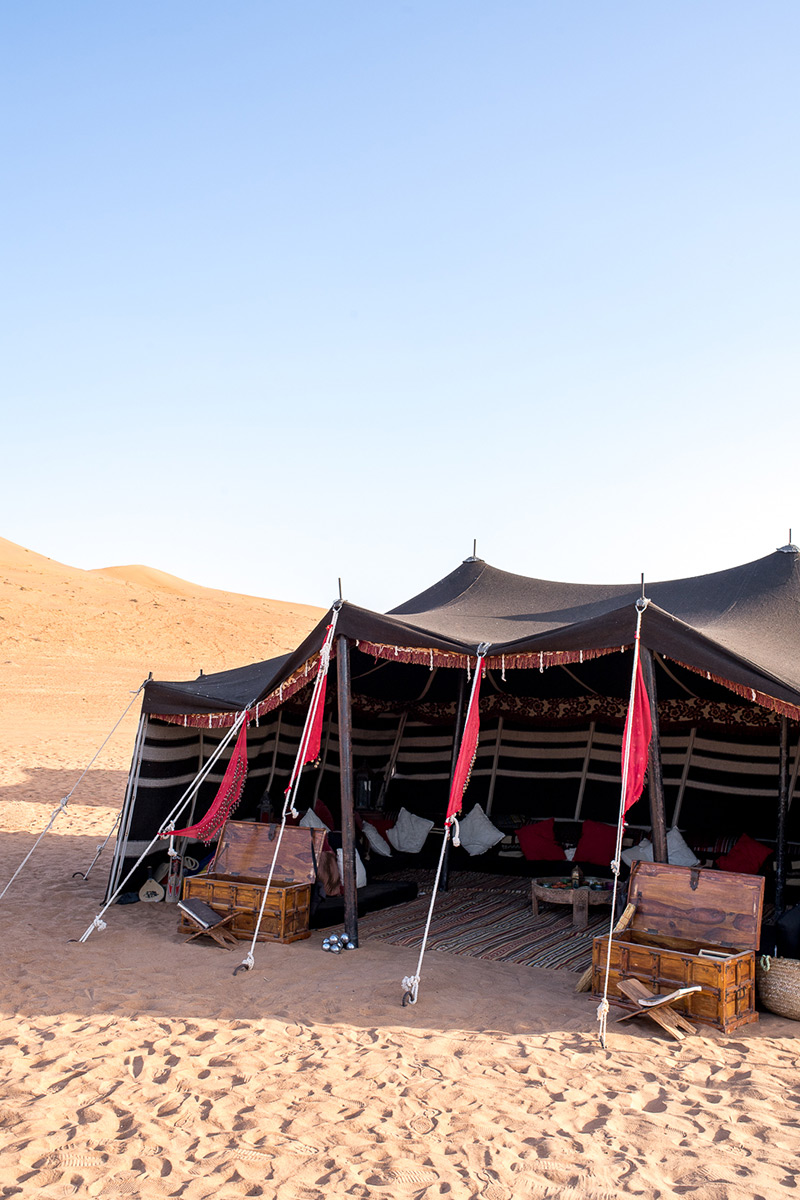 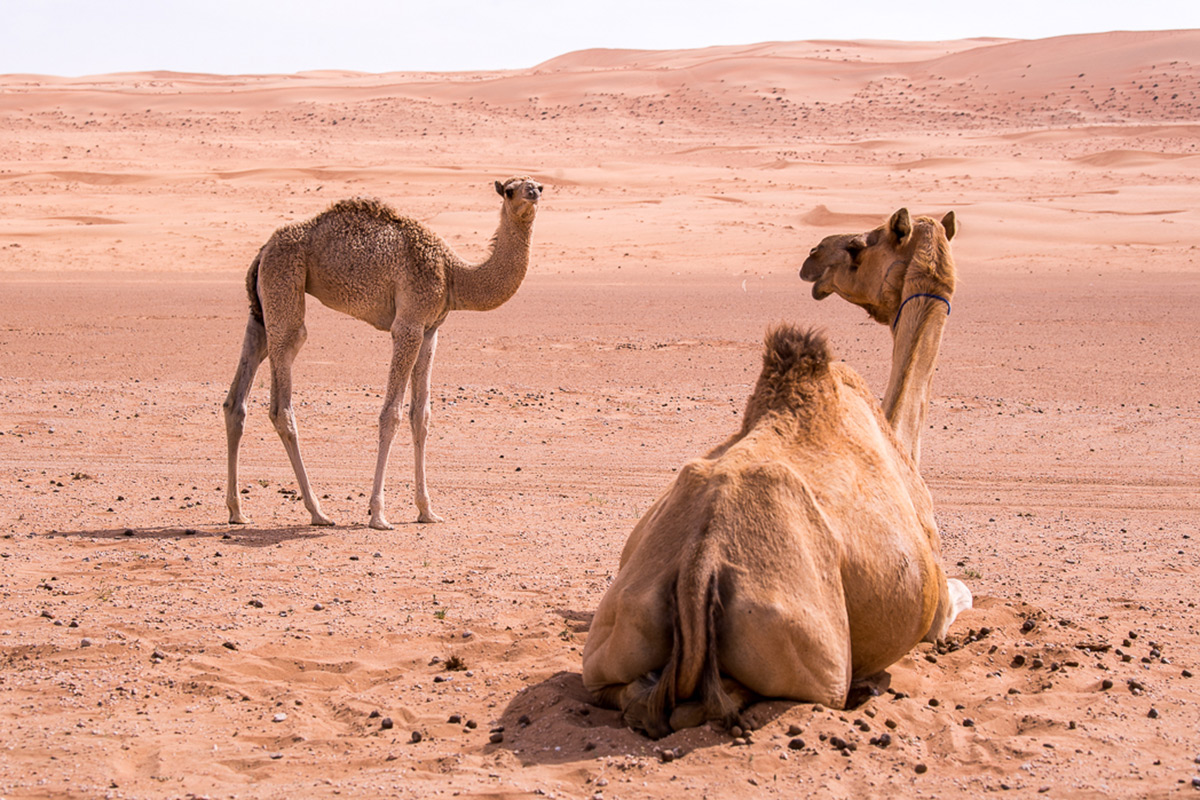 My favorite memory from this experience was sneaking out of our tent after the rest of the camp had gone to sleep and climbing the massive sand dune to lay out and look at the stars. Out here, it was only our tiny camp and a few bedouin encampments and the stars were phenomenal. We stayed out for at least an hour picking out the constellations and chatting. It was only the next morning that we learned that scorpions and snakes like to come out at night!