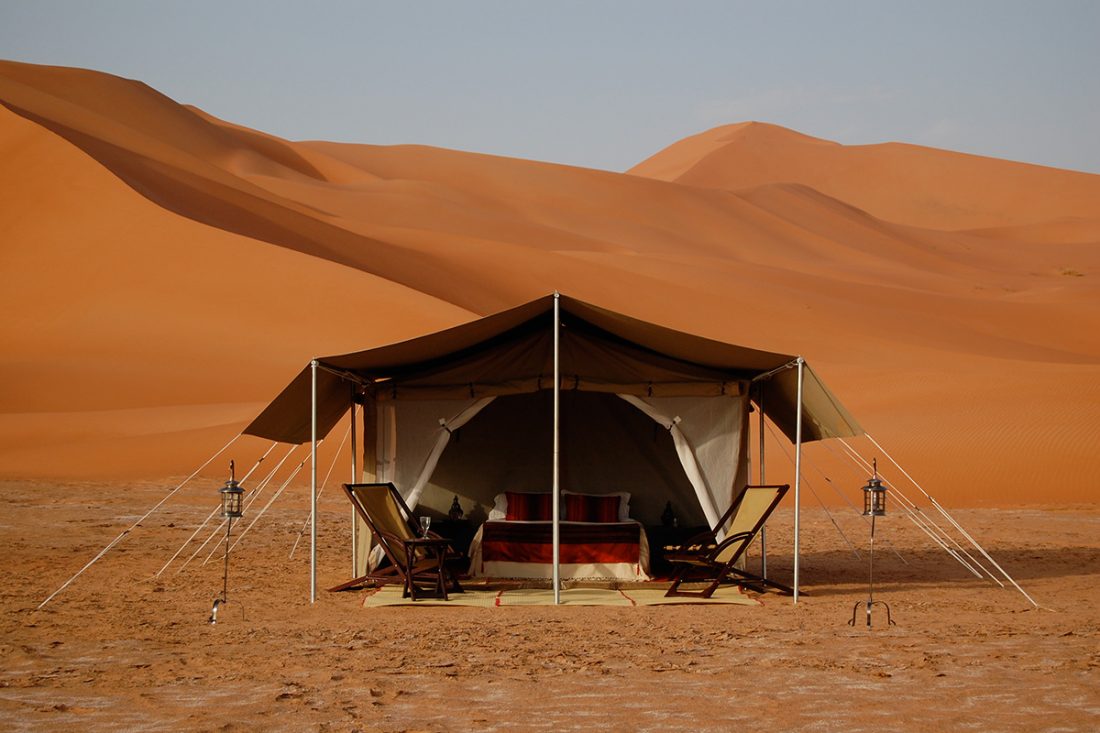 Sophy Roberts (How to Spend It)

Desert camping is the adventure for 2013, as extremely remote destinations become easier to reach and wilderness experts conjure up ever more astonishing levels of portable luxury. Sophy Roberts goes in for solitary refinement.

I have never been able to find the author again, as if he or she were some figment of my imagination, but I still remember the passage clearly: the writer described, without punctuation, a single moment when everything in the city fell silent, a splinter of a millisecond when the traffic lights paused on red at the exact same moment as every human in the vast metropolis stopped talking, when every television was turned off, when there were no planes in the sky, no clapping in the theatre, no brawling, barking, nothing. The sound of silence, the absence of everything in a brilliantly construed fiction, is something I have listened for often. It was only recently that I encountered it, on a trip to a little-visited desert in Oman.

I was camping under canvas on the rim of the Empty Quarter, or the Rub’al Khali, in the country’s south. This is the world’s largest sand desert, which stretches across some 250,000 square miles of the Arabian peninsula.  It is accessed via Salalah, the southern capital of the Dhofar region, a two-hour flight from Doha, followed by the best part of a day’s driving, much of it off-road. On the journey, we stopped to talk with camel herders, to picnic under baobab trees and smell fresh frankincense, which grows freely in the mountains that flank this ocean of sand.

In a curl of 500ft-high dunes, their spines filed sharp by the wind, we struck camp. I slept, or tried to sleep. Perhaps it was the high heat from the day before, or the slight fear that comes from feeling so far away from everything one’s familiar with, but when I stepped out of the black, camel-hair tent, the kind used by the Bedouin, I didn’t expect to experience the intensity of feeling that can come from nothing. “Life in western countries is clearly very hectic”, my Bedouin guide, Musallim told me earlier in the evening. “Here your people seem to like the peace and silence of a place where there’s no such thing as a rush.”

He had a point.  he crackle of the campfire had died; the staff slept elsewhere, behind the wall of sculpted sand. The sky was black and clear, with shooting stars making their journeys through the night, the tiny pin-pricks of light casting a luminescence that felt alien to someone used to a diet of street lamps. I could hear no animals, insects or birds. There was no wind, no candle light, just my seven-year-old’s slow and regular breath as he slept in our bed nearby. In that moment the silence filled me with a visceral sense of freedom and of acute vulnerability.

Such is the power of the desert. The desolation puts one on edge, or at least shifts the senses into a state of almost hyper-alertness, with ‘ghost water’, as the bedouin call mirages, one of the better-known examples of this response. Even without the sensorial trickery, the landscapes themselves can be breathtaking. With increasingly sophisticated logistical expertise available to the luxury travel industry, regions such as this, just 30 years ago reviled and feared, find themselves on wishlists alongside the Maldives which, when coupled with luxury camping solutions, make desert travel, hot, high altitude and polar, a discernible trend.

Evidence of this growing interest exists in how the boundaries of geography are being pushed harder each year, with improved accessibility opening up extreme destinations. New outfitters are popping up, the camps operated by the hard men of expeditionary travel. Experts include the likes of polar explorer Patrick Woodhead, who in 2006 started taking high-end campers into Antarctica with his company White Desert, and Sean Nelson, a British ex-Marine, who went from a job heading up training for the Desert Regiment of Oman’s national army to founding Hud Hud Travels in 2007, which is the company behind my Empty Quarter stay.

Such luxury flourishes make all the difference.  For while the modern traveller will still experience something of the desert’s shaleless monotony, these days it will most likely be from the comfort of a Eurocopter or a 4WD. One may also experience silence, but let’s put it into perspective: silence is not that frightening when there’s a man with a sat phone within 100 yards of one’s tent. And while my son may go through a week without a Nintendo DS in the Empty Quarter, he’s not cast completely adrift without diversions; in Oman there’s a surfboard provided for him to ride the dunes. As to food, the luxury logisticians have got that part nailed. In Nubra, we eat exquisite organic curries, from vegetables picked fresh out of an oasis garden; in Oman, we feast on slow-cooked lamb infused with delicate strands of Kashmiri saffron.